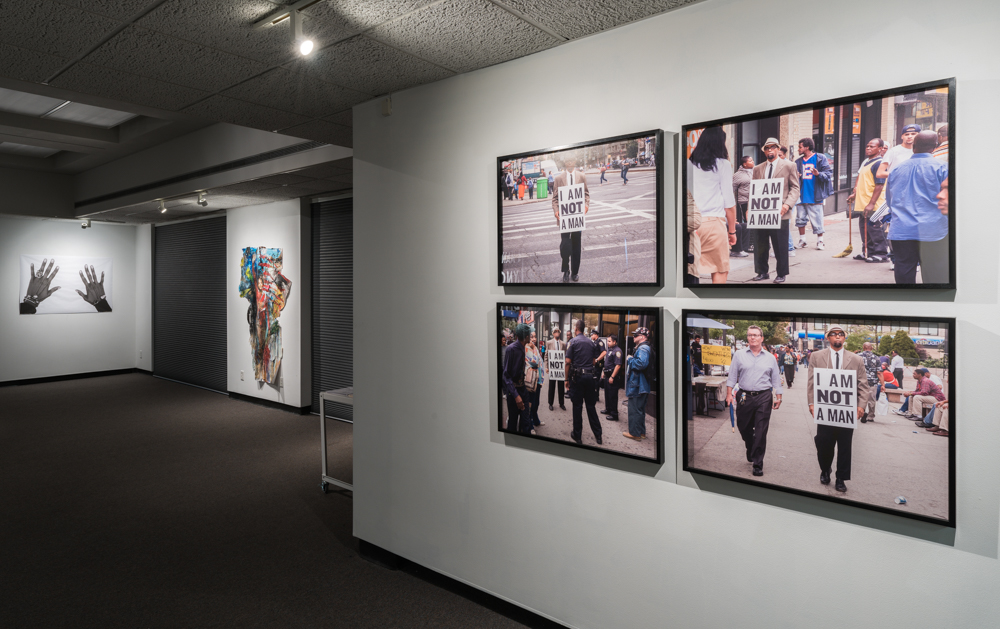 This is an image from Dread Scott's "The Weight of Hope" exhibition in the Clough-Hanson Gallery. The Weight of Hope is a group exhibition that examines the frustrations, exhaustion, and possibilities of this particular political moment, between the end of a presidential administration that was predicated on a promise of hope and…whatever comes next. The exhibition includes work by four artists, working across the country in a range of media. Dread Scott is well known for his challenging performance and video work that brings history into the present, foregrounding the black experience in a systemically oppressive society. Powerful and polarizing, his work was denounced from the Senate floor and involved in litigation that reached the Supreme Court. Mariam Ghani overlays China Mieville’s sci-fi noir novel, The City & The City, onto the landscape of St. Louis, melding fact and fiction in an elegiac look at the inequity that is born out in the geography of our cities. Damon Davis began the All Hands on Deck Project in the streets of Ferguson in 2014. It has since spread across the country as a testament to collective responsibility. In his large, unstretched paintings Terry Lynn combines powerful images, including some from local Black Lives Matter protests, with sumptuous brushwork and engaging surfaces to honor his subjects and inspire his viewers. In conjunction with this exhibition, Dread Scott lectured on his work on September 8th at 6:00 pm. Scott’s lecture was generously cosponsored by Rhodes College Communities in Conversation, the Rhodes College Africana Studies Program, and the Lillian and Morrie Moss Endowment for Visual Art. This exhibition was featured in the gallery September 9 - October 23, 2016.