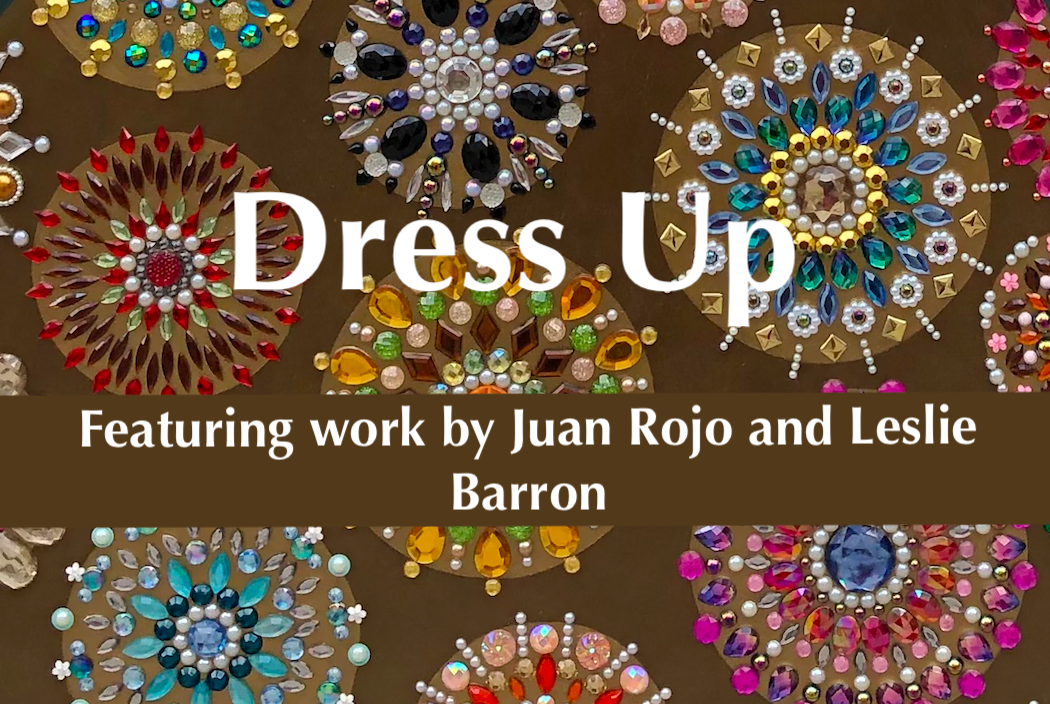 Clothes can be used as an outlet for self-expression, as well as a tool for boosting confidence. They give us the ability to become whatever or whoever we want to be, and they allow us to either fit in or stand out. This exhibition is comprised of pieces by Juan Rojo and Leslie Barron which show unusual interpretations of outfits we consider normal. They are made using unconventional items such as flowers, animals, and party decorations, questioning what constitutes clothing. Though both these artists focus on clothes in their art as a means of expressing ideas, they do so in very different ways.

Juan Rojo uses clothes in his paintings to convey ideas and turn his models into brides, noblewomen or even household objects. Rojo uses a combination of items that are important to his models and items he considers junk to create unusual versions of normal outfits. He then photographs the models in the outfits and paints them. At first glance, many of Rojo’s paintings seem like normal depictions of women in dresses, but after looking closer one can see the oddity of the clothes they are wearing. Nonetheless, the models in Rojo’s paintings possess a great deal of strength and dignity, despite the peculiarity of their clothing.

Like Juan Rojo, Leslie Barron uses objects as well as animals and flowers to create ornate, extravagant outfits in her paintings. However, Barron places very little focus on the wearers of these clothes, as she uses the outfits to transport the wearers into different time periods and places. The wearers of these outfits look confident and strong, and they do not seem to realize their over-the-top outfits are in any way abnormal.

Because of their clothing, the wearers in these paintings stand out, yet they all seem confident and self-assured. They make us question what clothing is considered normal and why. As you view this exhibit, consider the ways in which clothing is used to help us fit in, stand out, and gain confidence in ourselves.

Juan Rojo is a Memphis-based artist who is originally from Spain. He received a degree in Fine Arts from the University of Salamanca in Spain and later obtained his Master’s degree in painting and video from the University of Maryland, College Park. Rojo is represented by Rodrigo Juarranz Gallery in Spain and by Jay Etkin Gallery in the United States. He has exhibited extensively in both the United States and in Europe.

Leslie Barron is a Memphis-based artist who received her Bachelor’s of Fine Arts in painting from the University of Memphis. She is represented by L Ross Gallery in Memphis. Barron’s work is made up mostly of mixed media paintings and she has exhibited in many cities throughout the southern United States. 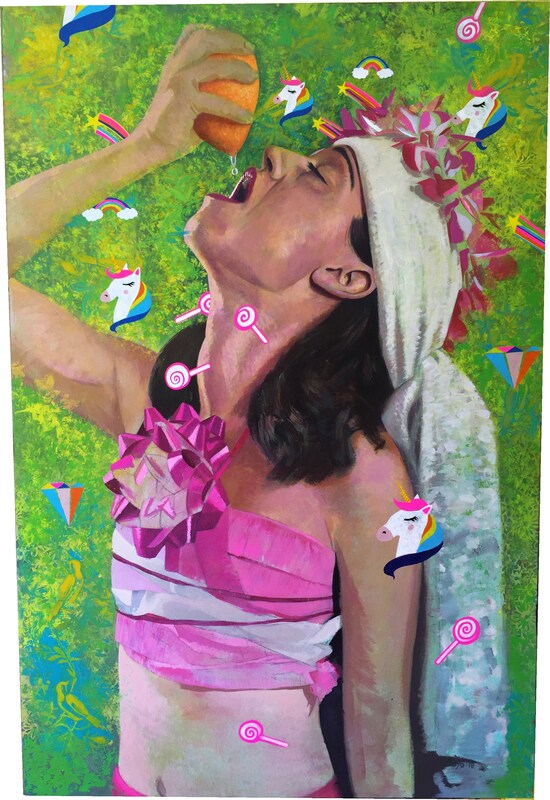 Intrigued by the idea of white weddings, Juan Rojo painted The Fountain as an unusual interpretation of a young bride. Her dress is made of party decorations, and she is wearing a veil made out of a towel. She does not look like a typical bride, yet she does not appear to be bothered by that. 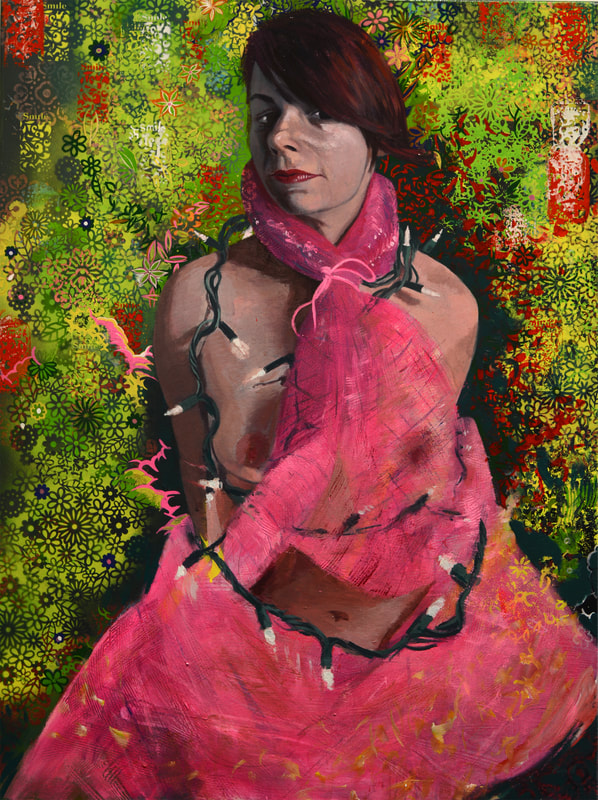 Christmas Lights shows another interpretation of a bride. She is wrapped in shiny fabric and Christmas lights to look like a gift, which represents the way in which brides are sometimes treated like gifts for their husbands. Despite the submissive nature of her outfit, the model in this painting has a stern and strong glare. 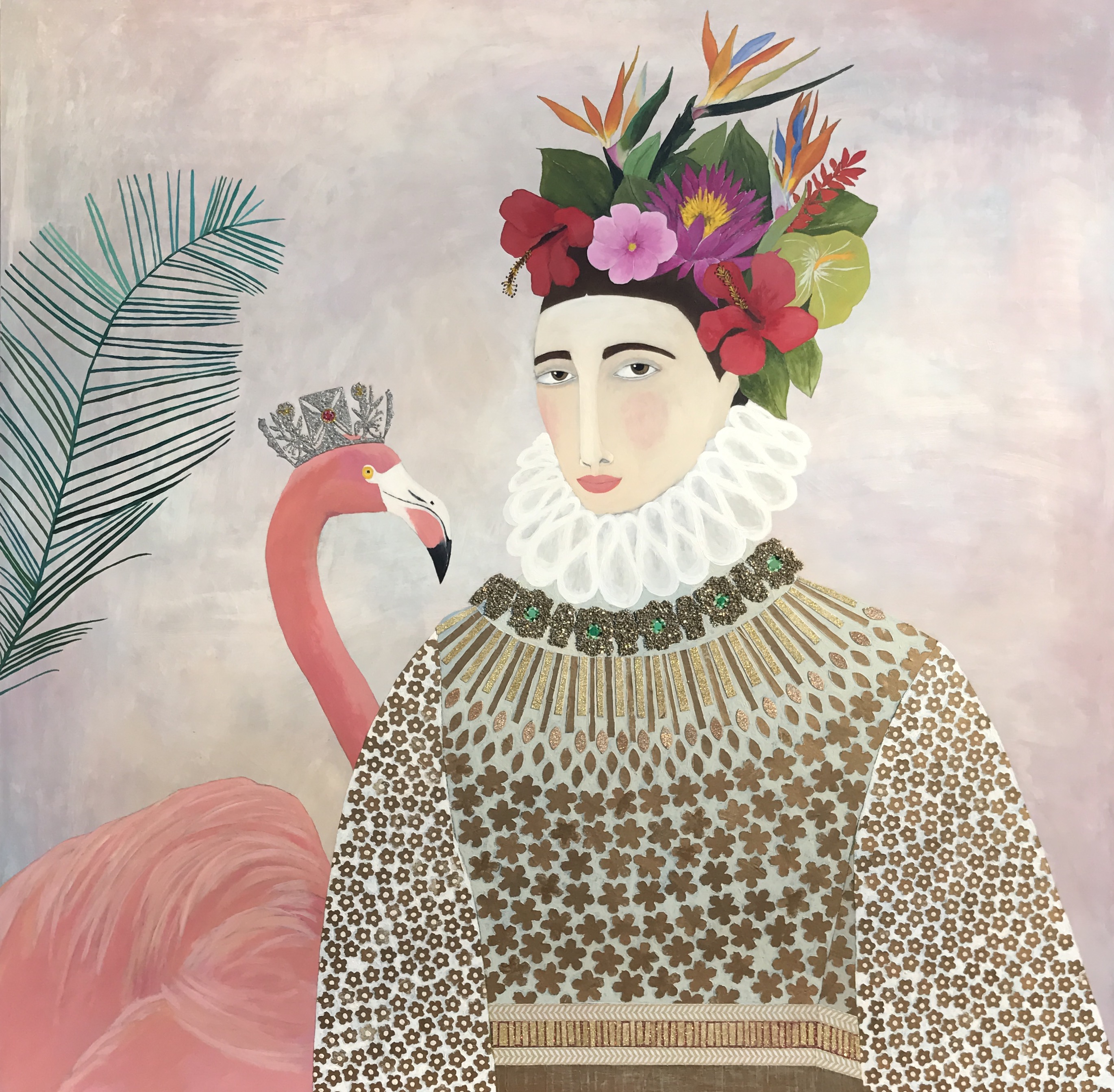 Jewels of the Atocha

Inspired by a trip to see the sunken ship The Atocha in Key West, Leslie Barron painted Jewels of the Atocha, which shows her interpretation of a Baroque Spanish princess in Key West, Florida. The wearer of this outfit looks regal and strong in her unusual combination of tropical flowers and a heavy, ornate dress with a large Baroque collar. 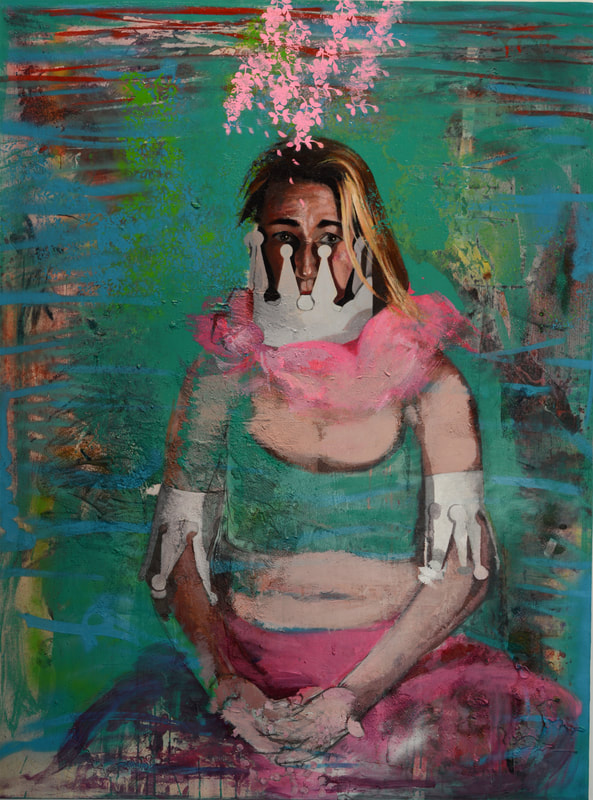 Queen of the Lost Boys

Queen of the Lost Boys shows Juan Rojo’s interpretation of a Baroque portrait, using paper crowns for a collar and sleeves. This unconventional version of an outfit that was normal in the 16th and 17th centuries looks somehow very odd in the present day. It makes us wonder why styles change and why we consider certain outfits abnormal.

Unconscious Collaboration is an unusual take on a Victorian portrait. The sitter in this painting is wearing a hat made of a colander and a dress made of paper lanterns. At first glance the outfit looks almost normal despite the oddity of the materials, in part because of the wearer’s confident pose. 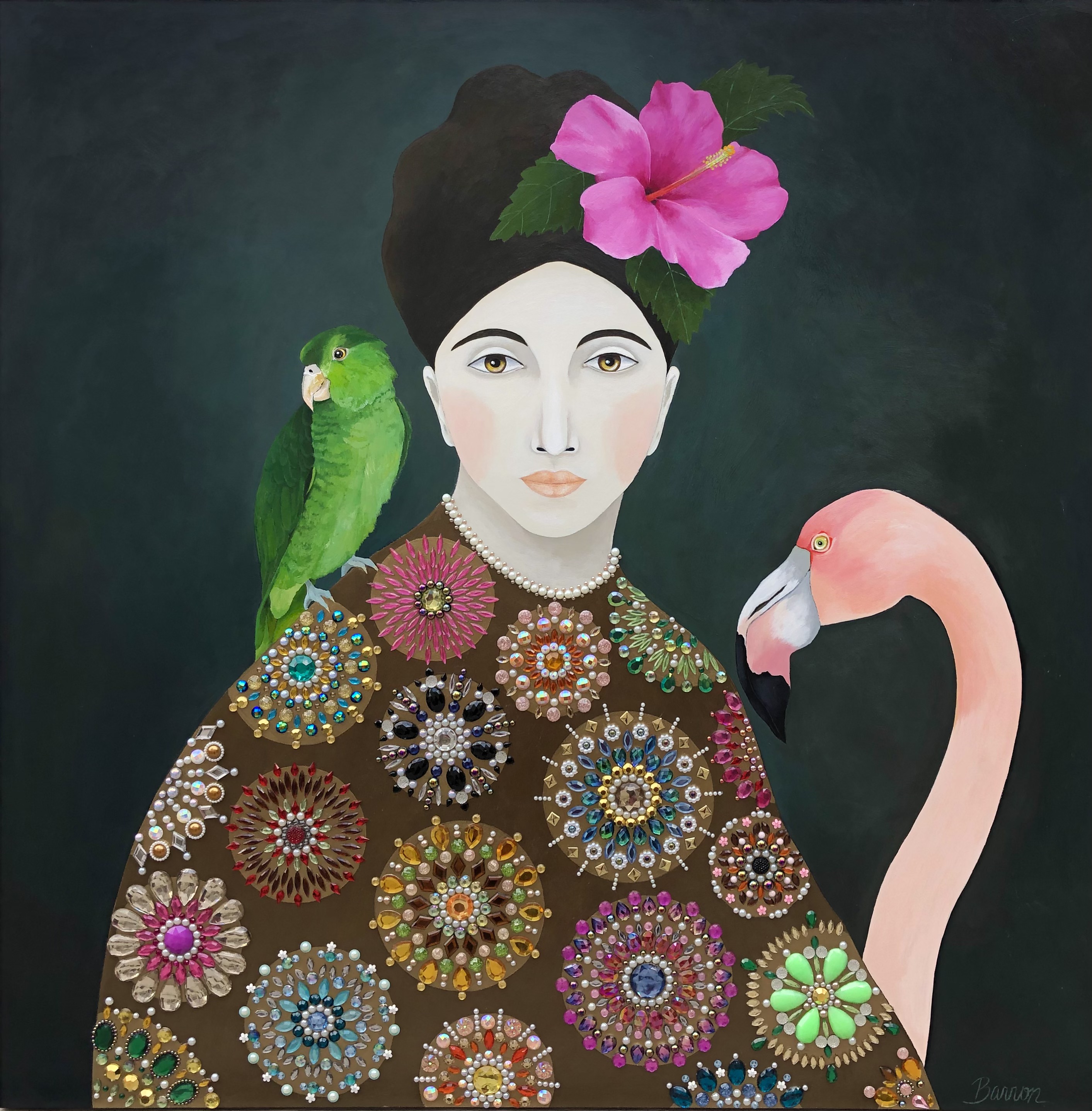 Night at the Tropicana

Night at the Tropicana shows a woman in a beaded robe with tropical animals and a beachy flower in her hair. Because of her stoic expression, we do not question who she is or why she has birds around her. She doesn’t seem to think her ensemble is out of the ordinary so why should we? 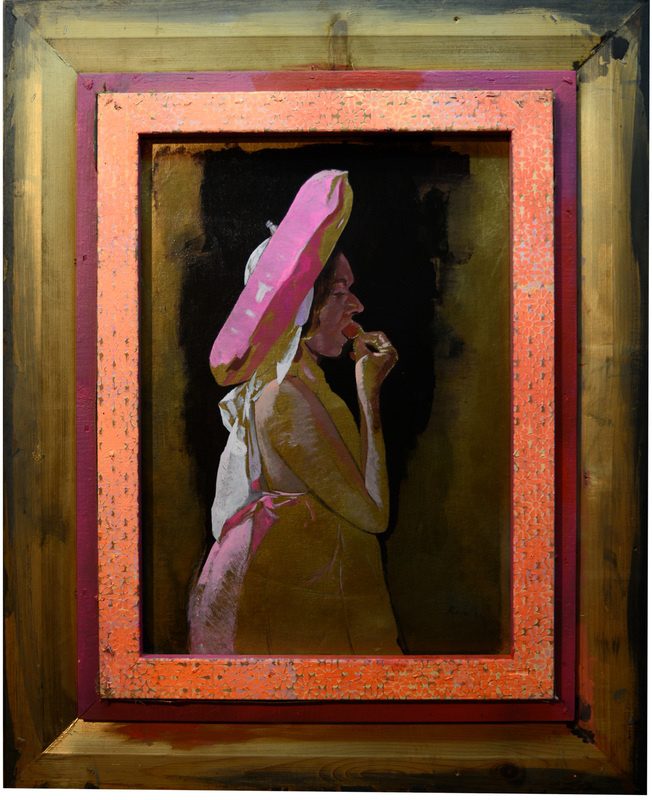 Lady of the Swim Ring

Lady of the Swim Ring shows a distinguished-looking woman who appears to be in a normal dressy outfit with a hat. After taking a closer look, one can see her hat is actually just a pool floatie. She does not seem to question the odd nature of her hat, which makes it look almost natural that she is wearing it. 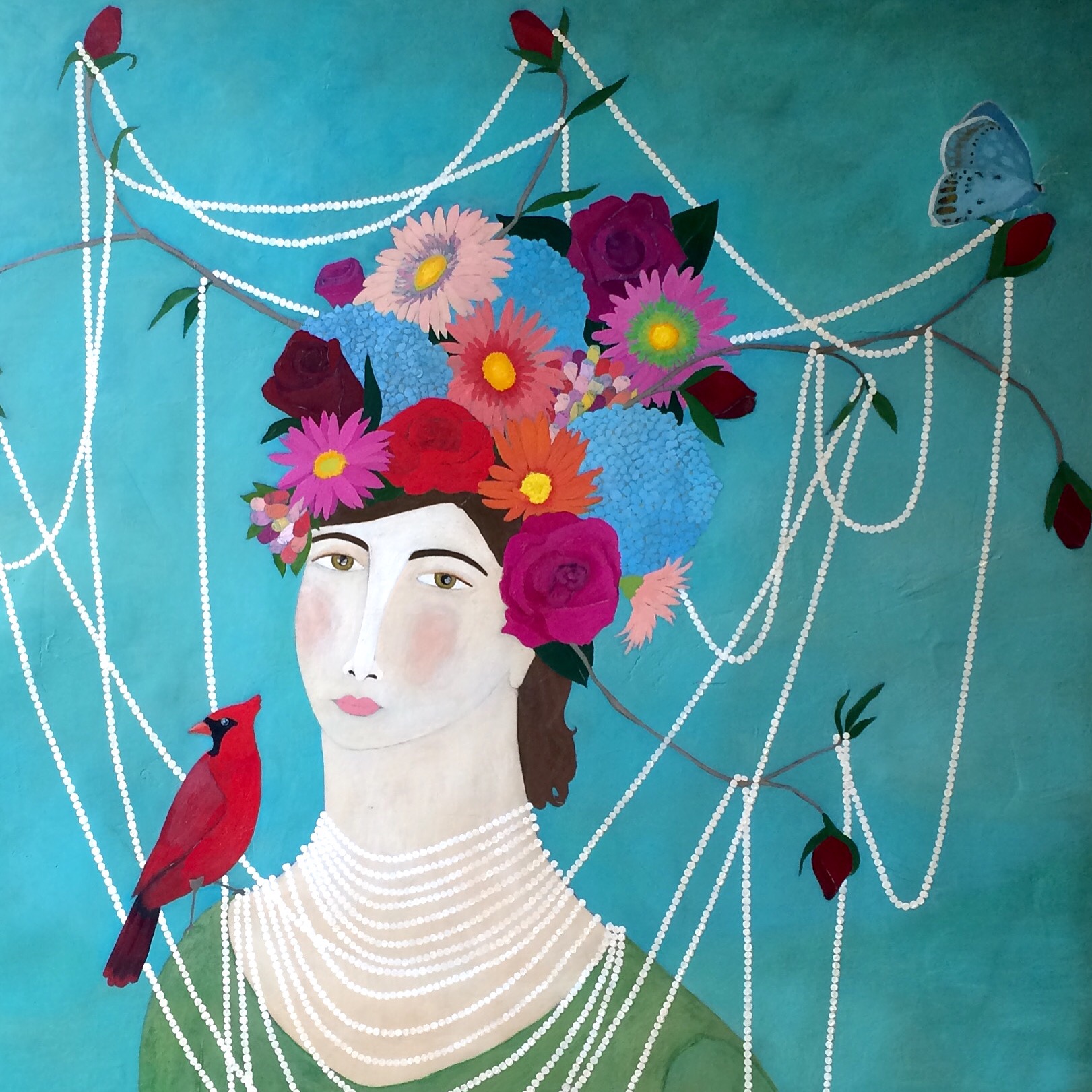 Posing in a low-cut dress and a long string of pearls, the figure in Chris’s Cardinal appears to be a wealthy woman from the 1920s. she has a giant hat which holds strings of pearls and looks almost like a bird’s nest. Despite the absurdity of her hat, she still has a stern glance, which makes her outfit seem somehow more normal. 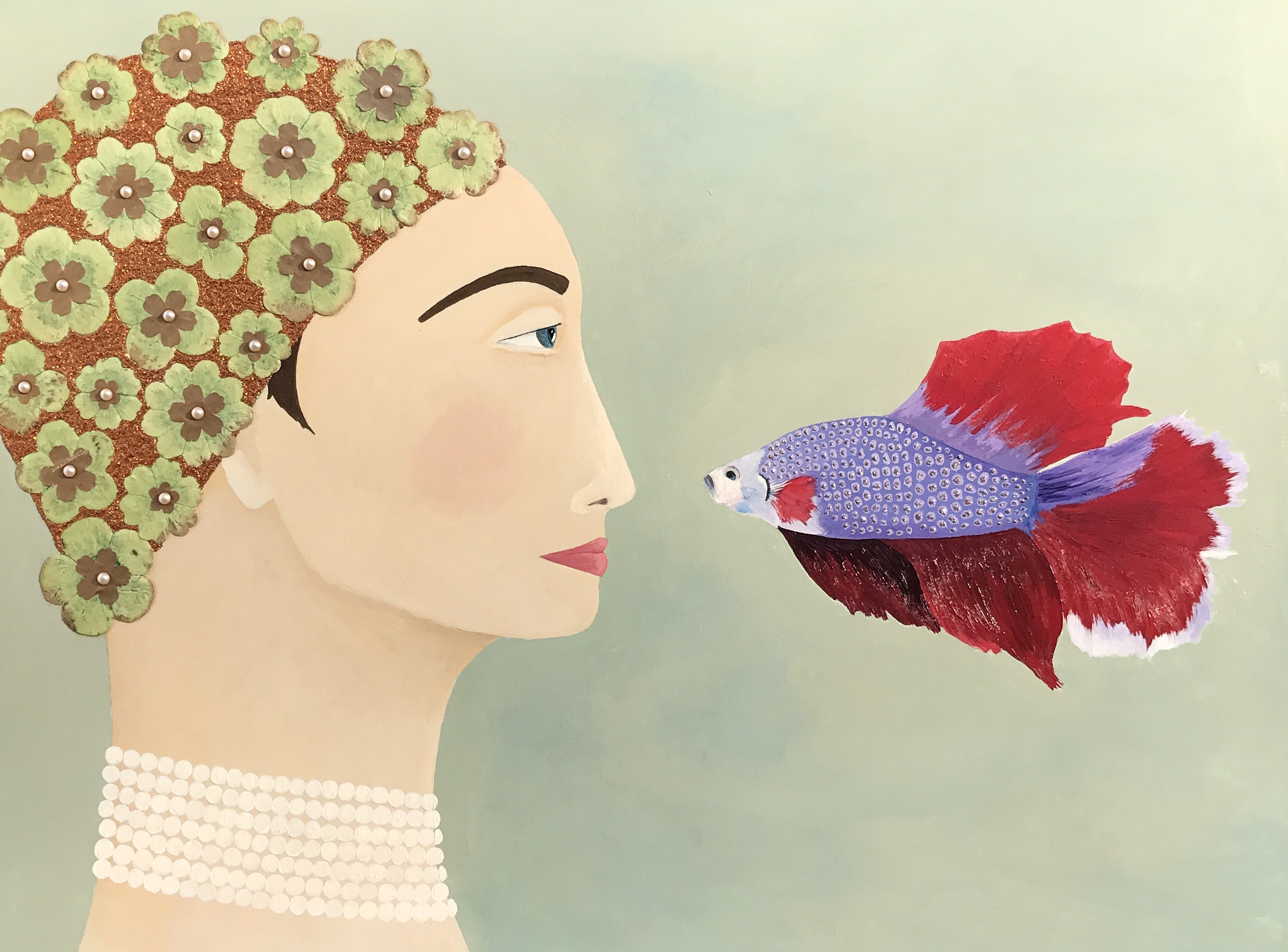 The woman in Hello Winifred is wearing an ornate 1920s-inspired swim cap and pearls while she appears to be swimming with a beta fish. This pairing of cocktail jewelry and swimwear would look odd in any other setting, but the stern gaze of the woman makes it look as though she feels completely comfortable in the outfit.