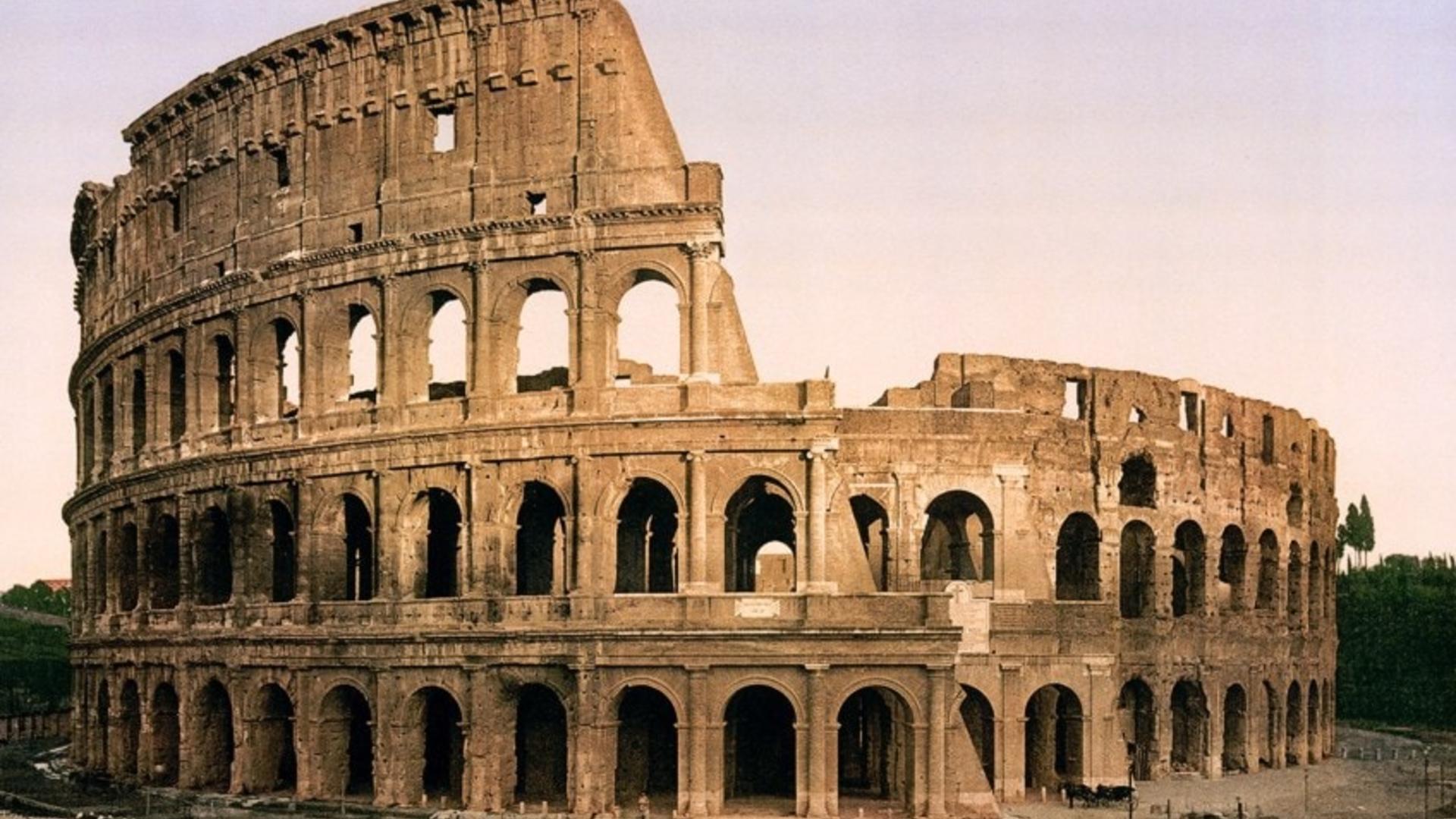 Why Illustrate Architecture on Roman Coins? An Overview:

Depictions of architecture on Roman coins are beneficial to modern scholars because they are one of the best sources to determine what the original structures may have looked like in their original form. Coins offer insight into how temples, military fortifications, and public buildings appeared in antiquity (Trell, 1976). Furthermore, emperors would be able to choose which structures to illustrate on the coins minted during their reign. It is important to note that coins were an art form constantly in circulation; they would have changed hands often, providing the opportunity for these images to be seen by a more significant number of people than other propaganda might have been. In this sense, an emperor could have carefully chosen to include the building projects carried out during their reign and other significant buildings. Military fortifications or religious buildings would have connected the empire and the emperor himself to ideas of military strength or divine will. There are numerous examples of these types of coins, sometimes even depicting entire cities or regions (Trell, 1976). Ultimately, choosing to include images of building complexes, arches, and other architectural elements on Roman coins would have served as a way for emperors to publicize their successes (Trell, 1976). Even so, they remain a valuable source of information for modern scholars in rebuilding our view of the past.

Late in the empire, architectural imagery denoting military success became more popularized. Images of triumphal arches serve as one of these standard images, such as the Sestertius of Nero included below. Camp gates, in particular, on Late Roman Imperial coins, became popular after they were first issued under Diocletian and later under Constantine, for example. The camp gate itself signifies military strength and preparation, thus proclaiming the prowess of the empire, and could have been a result of the rapid fortification of cities late in the empire (Elkins 2013).

It was not uncommon for these images to be paired with the face of Constantine or perhaps Licinius on the opposite side, often with an inscription commemorating the honor of the emperor or military, such as the example on coin 47 “PROVIDENTIAE CAESS,” which translates to “foresight of the prices”. Another element commonly paired with imagery of camp gates were stars above the turrets, such as in coin 32, which is taken to symbolize victory in military pursuits. Ultimately, when combined with architectural depictions, these symbols honor the military successes of the empire (Elkins 2013).

Coins 47 and 32 from the Burkhart Collection: 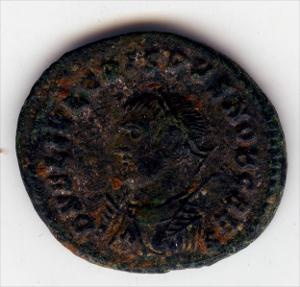 The obverse face of coin 47 depicts the bust of Flavius Julius Crispus, son of Constantine the Great, turned towards the left. This image is interesting since it is believed that Crispus died on the orders of his father. An inscription encapsulates the main image and reads, "IMP FL IVL CRISPUS NOB CAES." The coin also has a globe, scepter, and Mappa alongside the bust and a dotted border. It is believed that the coin dates to around 137 CE. 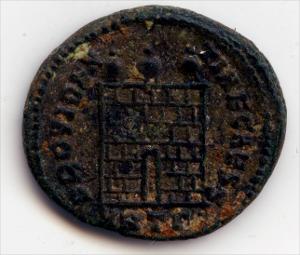 The reverse of coin 47 illustrates a bricked camp gate (depicted by lines in an off-set grid pattern) with a single door directly in the middle, again with a dotted border around the outside. The upper portion has three rounded turrets (some believe these are guards), and the inscription on either side of the main image reads "PROVIDENTIAE CAESS." 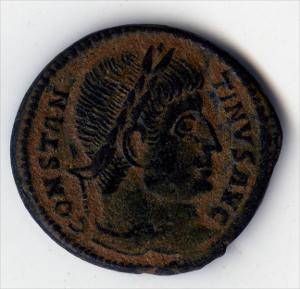 The obverse face of coin 32 depicts Constantine the Great, which would date the coin from between 307 to 337 CE. The text on either side of the main image reads "CONSTANTINVS AVG" or "Contantinius Augustus." The bust of Constantine appears to wear a laurel crown and faces towards the right, surrounded by a dotted border. Laurel crowns were believed to represent military victory, thus honoring the emperor. 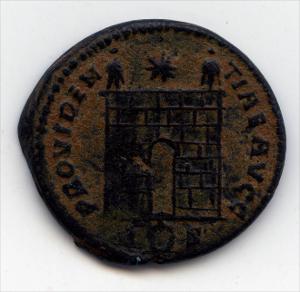 The reverse side of coin 32 shows a bricked camp gate with a door. Above the entrance is what are either two turrets or two guards and a star above the main door. The text reads "PROVIDENTIAE AVGG." The images are mostly visible and dark in color against a lighter brown background.

Sestertius of Nero:
Obverse: (Left) The sestertius of Nero is believed to be either copper, bronze, or brass, and the inscription is assumed to read, “NERO CLAVDIVS CAESAR AVG(VSTVS) GER(MANICVS) P(ONTIFEX) M(AXIMVS) TR(IBVNICIA) P(OTESTATE) IMP(ERATOR) P(ATER) P(ATRIAE.” This version would translate to “Nero Claudius Caesar Augustus Germanicus, Pontifex Maximus, with tribunician power, imperator, father of the country.” The bust of Nero faces to the right with a crown denoting military victory (Nero).

Reverse: (Right) The reverse face of the Sestertius of Nero depicts a sizeable triumphal arch that would signify military victory. A garland stretches between the arch, and elongated columns line either side. Mars, the god of war, stands to the left inside the niche. He holds a shield in his right hand and a spear in his left. Images of soldiers adorn either side of the arch and stand atop it as well, while the letters “S” and “C” are inscribed to the right and left of the arch. These letters could mean S(ENATVS)-C(ONSVLTO), or “by decree of the senate (Nero).”

Architectural imagery was often used to celebrate Roman religion on coins as a way to commemorate and honor various gods and goddesses. This iconography sometimes honored the emperor or connected him to a specific deity. Different varieties of religious buildings and architectural elements were used to convey this message. These could range from building complexes, temples, altars, and more (Rowan, 2016). At times, the architecture could serve as a background for religious ceremonies. One example is the image of the tetrarchs making a sacrifice in front of a tripod, featured on the Silver Argenteus of Diocletian below. The sacrificial imagery reinforced the idea of Roman piety while being emphasized by the scene set by the architectural elements.

Because the coins were public currency and would be in continuous circulation, it has also been suggested that selecting specific religious buildings to feature on Roman coins would have served as a reminder of the communal identity. For example, a local temple may be associated with a particular deity, perhaps a god or goddess one wanted to be connected to on a public scale. This idea would again impose the divine will of the gods or reinforce a familial legacy. Another way that architectural depictions on Roman coins could be used to religious ends is to emphasize the idea of the Imperial Cult or emperor worship (Rowan, 2016). Often, the temples depicted had an association with a specific emperor, sometimes indicated by their bust featured on the opposite side.

Coin 30 and other Examples: 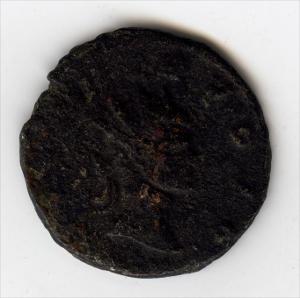 The reverse side of coin 30 is also challenging to see and read because of the wear and smoothing that has occurred over time. However, the image shows an altar and the letters "IS NS." The altar is comprised of four quadrants with one dot in the middle of each. While the altar itself is not a building, it would traditionally be held inside a temple. It could be considered an architectural element that the emperor would use to bolster his image. 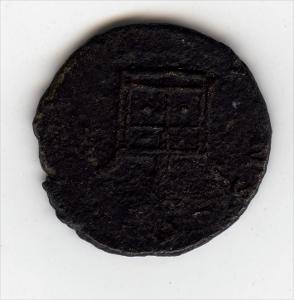 Coin 30 from the Burkhart Collection is a Billon Antoninianus of Imperial Claudius II Gothicaus. The coin is believed to date from around 268 to 270 CE. Due to smoothing and wear, the image is difficult to see, but the obverse side depicts the bust of emperor Claudius II facing to the right with the words "DIVO CLAUDIO" surrounding the image.

Obverse: (Left) This silver denarius from the era of Marcus Volteius dates to around 78 CE. The obverse image is of the bust of Jupiter wearing a laurel crown and is surrounded by a border of dots. The figure faces towards the right and has a straight, elongated nose with defined locks of hair (Marcus Volteius).

Reverse: (Right) The reverse coin face shows a Doric-style temple with four columns, dedicated to Jupiter. There are clearly distinguishable doors with what appears to be a thunderbolt in the pediment and abstracted acroteria. [M VOL]TEI M [F] is written across the bottom of the coin. It is believed that this coin was minted to honor the newly beginning reconstruction of the Temple of Jupiter Optimus Maximus. This temple was highly significant to the Roman people and was perhaps one of the most critical pieces of architecture from this time period (Marcus Volteius). 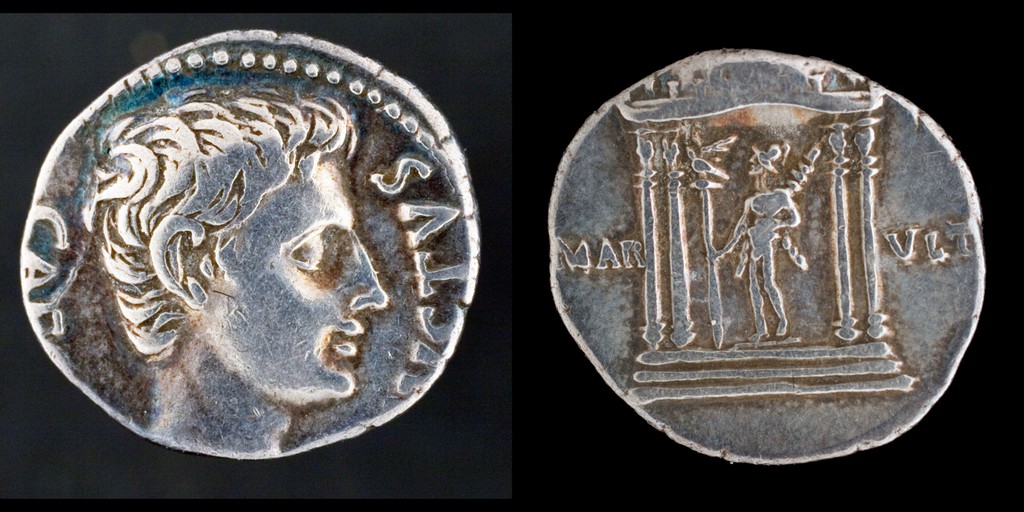 Obverse: (Left) The obverse vase of the Silver Denarius of Augustus shows the head of Augustus facing towards the right. It bears the inscription “CAE[SAR AVG]VSTVS” or “Caesar Augustus.” His head is not adorned with a crown or laurel wreath in the same way as other emperors and depictions on coins. This choice could connect to his desire to be known as a more accessible “princeps” or ruler of the people (Augustus).

Reverse: (right) The reverse side of this coin presents a temple with a domed roof and four columns extending upward from the front steps. Mars, the god of war, stand inside the temple, holding a spear in his right hand and wearing a cloak. The words MAR(TIS)-VLT(ORIS) appear on either side of the temple, which translates to “of Mars Ultor” or “Mars the Avenger.” The duality of this imagery combines both religious and militaristic meaning, which would have sent a message about Augustus' religious authority as Pontifex Maximus and as a military leader (Augustus).

When Religious and Military Imagery Intersect:

Obverse: (Left) The head of Diocletian with a laurel crown is depicted on the obverse side of the coin. He is illustrated as facing towards the right with the words “DIOCLETIANVS AVG” written to the right and left sides of the figure (Diocletian).

Reverse: (Right) The reverse face of the Silver Argenteus of Diocletian shows an interesting illustration of the tetrarchs of Rome. It would appear that the four emperors are making a sacrifice over a tripod in front of a structure with six individual turrets. The inscription says “VICTORIA SARVAT.” It is estimated that this coin dates from 294 CE. As such, this coin would represent a turning point after the four emperors had been established and the attempt to reunify the empire. The turreted structure is assumed to be a military fort, which alludes to military power, while the tripod shows the religious significance and divine meaning (Diocletian).