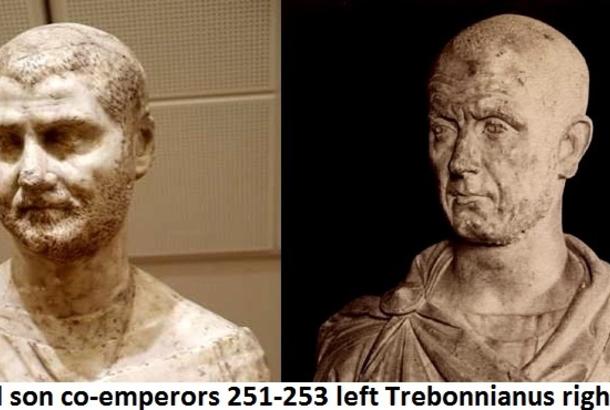 The Reign of Father & Son

Trebonianus Gallus was one of Rome’s shortest-tenured emperors as he only lasted about two years. His entire career lingered around political and militaristic statuses. He earned the trust of his emperor during his time, Emperor Decius, and was appointed as governor of the Roman province of Moesia Superior. The following year, after his appointment as governor, the Emperor Decius died in the Battle of Abrittus at the hands of the Goths who were in conflict with the Romans over raids into the Roman Empire. Despite rumors and conspiracies that Gallus had conspired with the invaders that resulted in Decius’ death, the soldiers of Decius’ empire proclaimed Gallus as emperor. Due to Decius having a remaining son, Hostilianus, he was legally the next in line, but with the popularity of Gallus among the soldiers, it was difficult for there to be a sole ruler. As neither of them backed down from becoming emperor, Gallus chose to rule together as co-emperors with Hostilianus to avoid a potential civil war for the throne. After some early success in his reign, like establishing peace with the Goths and being formally confirmed as emperor by the Senate, his son, Volusian, was appointed Caesar. After Decius was deified, Hostilianus seemed to disappear - it is said that he may have died in an outbreak of a plague – and so Volusian took his place, and ruled as co-emperor with his father. Despite the strong beginning as co-rulers of Rome, Gallus and Volusian soon began to struggle with invasions and attacks, which led to some discomfort among the masses. These continuous attacks did not please the army, so a new emperor was proclaimed by the name of Aemilian. With a usurper gaining popularity among the Roman people and soldiers, Gallus and Volusian were preparing to fight and defend their claim to the throne. Unfortunately, Aemilian’s greater popularity was enough to diminish any possibility of Gallus and his son coming out victorious, with the father and son duo coming out deceased in August 253 CE, with the speculation that it could have been their own troops who killed them.

Representations on Roman coins have always held great importance as most times, they represented the values and intentions of the emperors of a specific era. The Roman Empire had fallen victim to previous acts of natural disasters such as the eruption of Mount Vesuvius in Pompeii, and during Gallus’ reign, it struck again as a plague outbreak had affected Rome and the western provinces taking the lives of many. Most Roman coins were created with an observe, that mainly had a representation of the emperor during the time, and a reverse which most times, had imagery meant to send a message. Depictions varied from inscriptions to religious symbols, which were intended to send off a message of hope and the idea that the emperor actually cared about the issues at hand. Gallus was a believer of the Roman religion, so many of his coins had reverses of Roman religious imagery such as gods or goddess. In a world where public opinion mattered tremendously to maintain a high status, especially in the military, it was important for any and all imagery representing an emperor to also represent ideals and beliefs that would appeal to the Roman people. 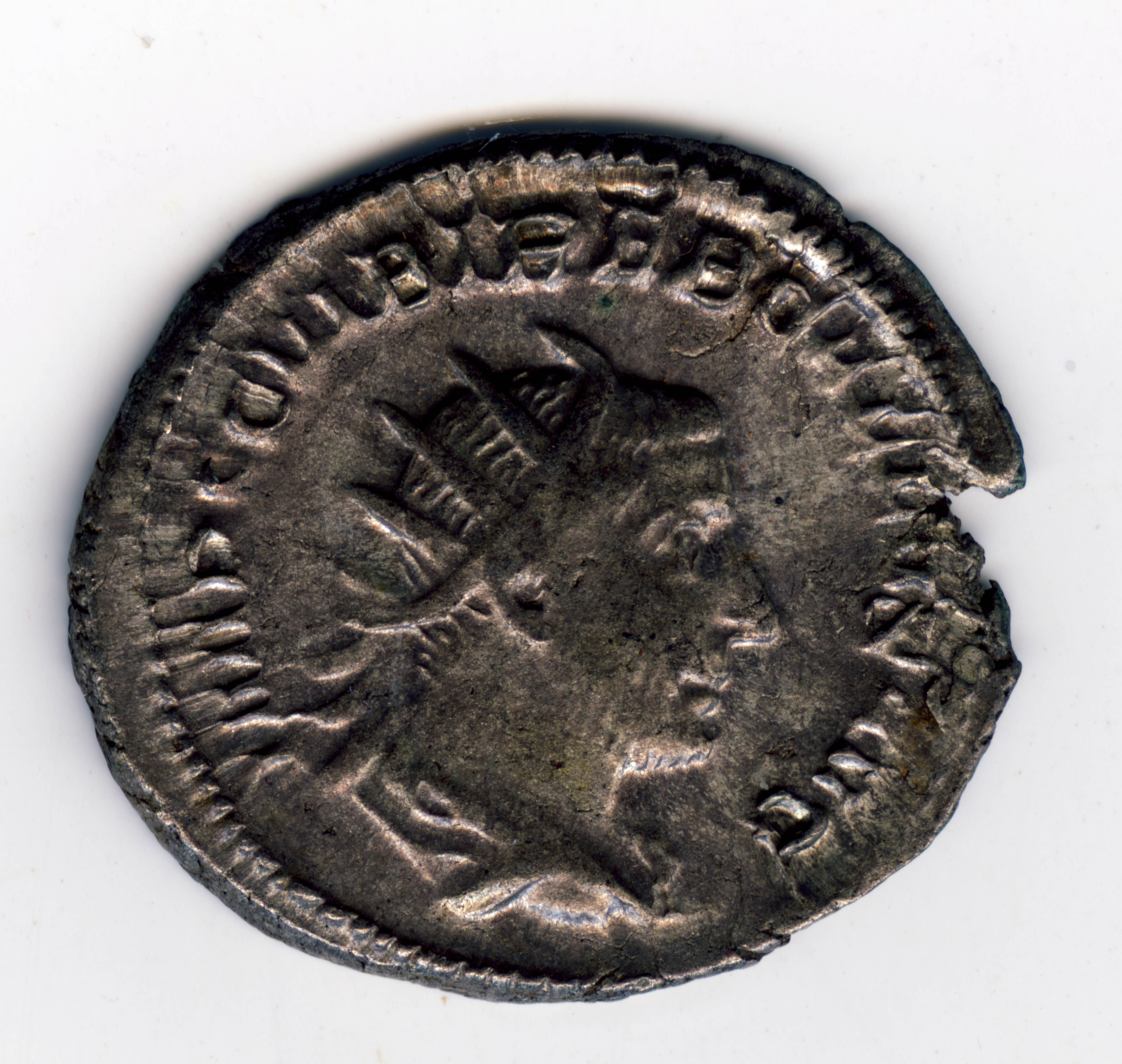 This Roman coin is of the Antoninianus denomination and made out of silver. It ranges from the years 251 CE to 253 CE under the authority of Trebonianus Gallus. Its mint is from Mediolanum in the region of Syria. The observe depicts well-preserved portrait of Trebonianus Gallus encircled with the inscription of “IMP C VIB TREB CALLVS AVG”. The bust is draped, radiating towards the right. It depicts Gallus wearing what seems like a crown, and there are slight implications of facial hair on his face. 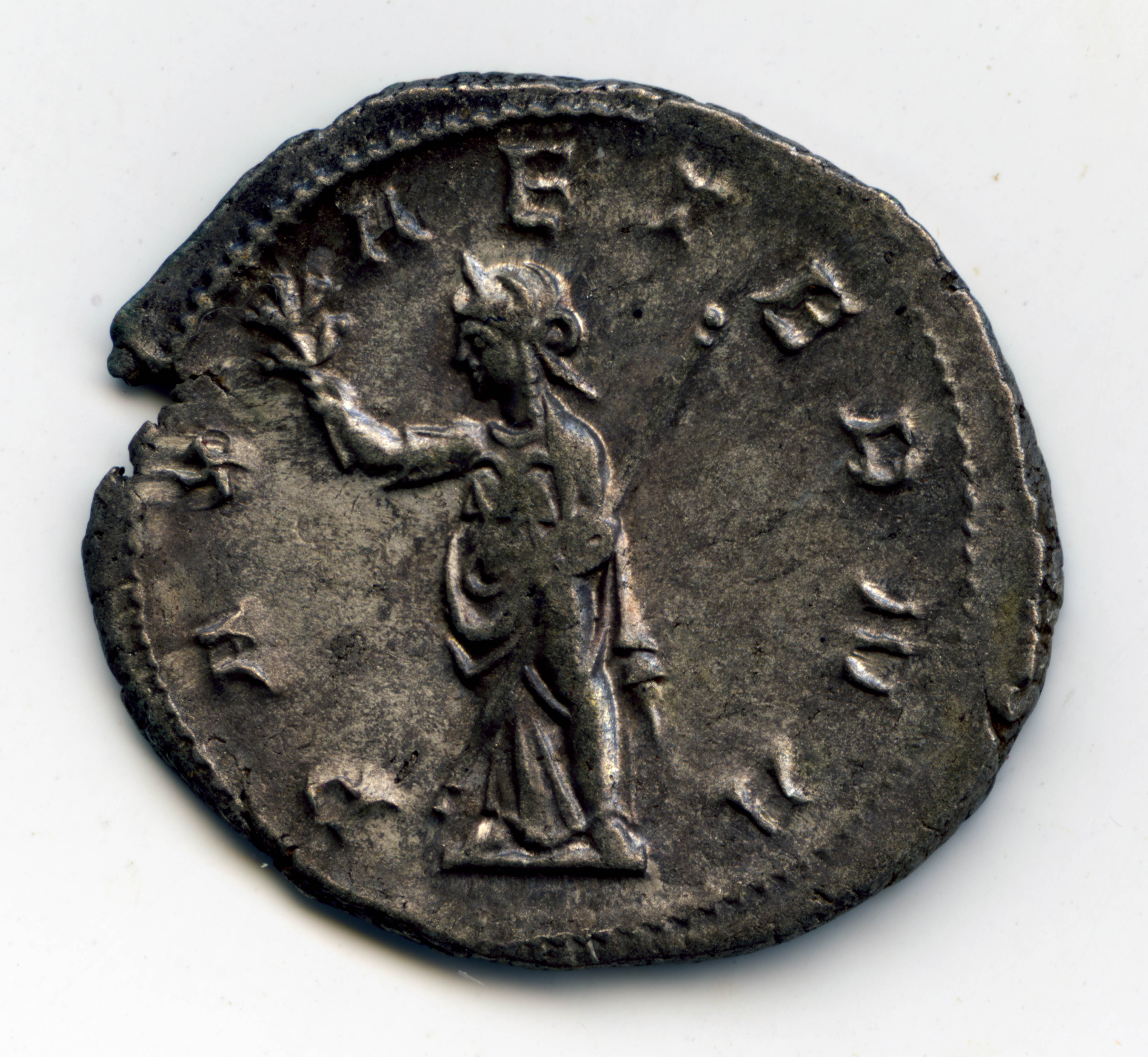 The reverse of this coin is showing the deity of Pax facing towards the left, with drapes covering the body and what seems like a torch being held in what can be assumed to be the right hand. It is encircled with the inscription of “PAX AETERNA”. 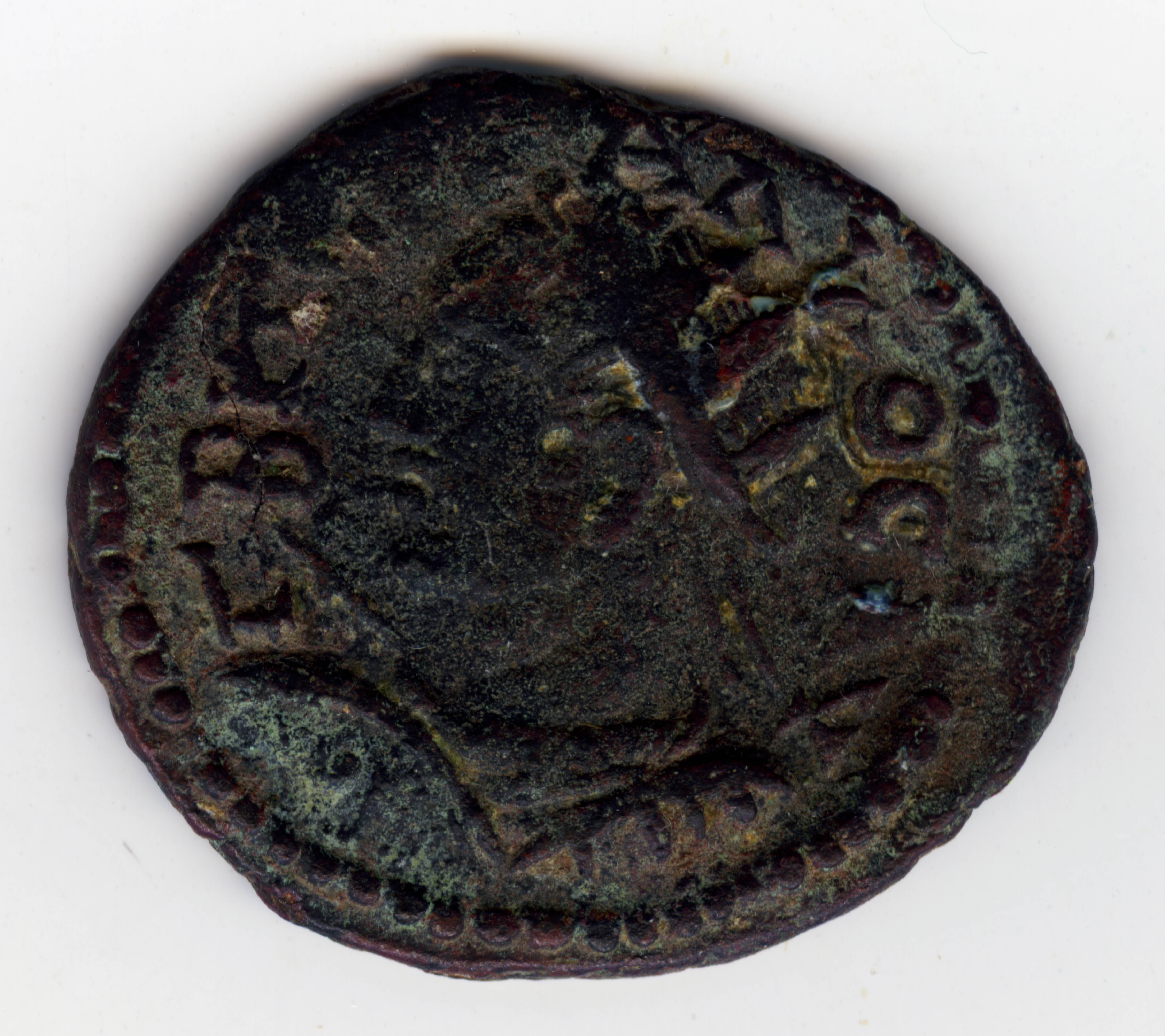 This coin is under the denomination AE of Nicomedia and is made out of the material of Orichalcum. It is also from the years of 251 CE to 253 CE and was minted under Trebonianus Gallus. The observe is a radiate cuirrassed bust of the emperor Gallus facing left and holding a spear with a heavily worn out inscription. Originally in Greek lettering, the inscription read as “C BI TER GALLOC AUGU”. 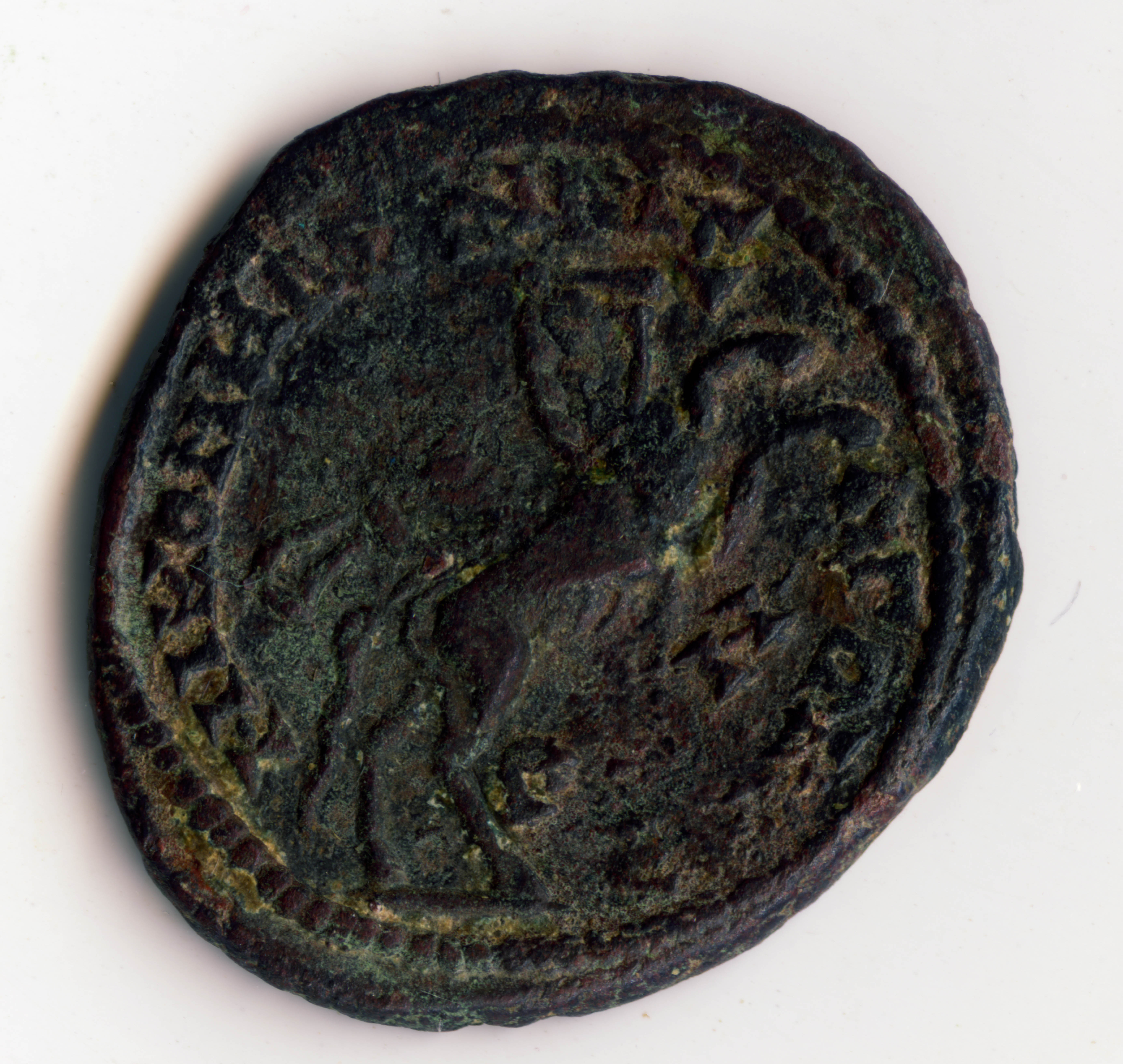 On the reverse is a portrait of the emperor Trebonianus Gallus on horseback. It is also surrounded by another Greek inscription which reads, “NIKOMHDIWN DIS NEWKOR/WN”. 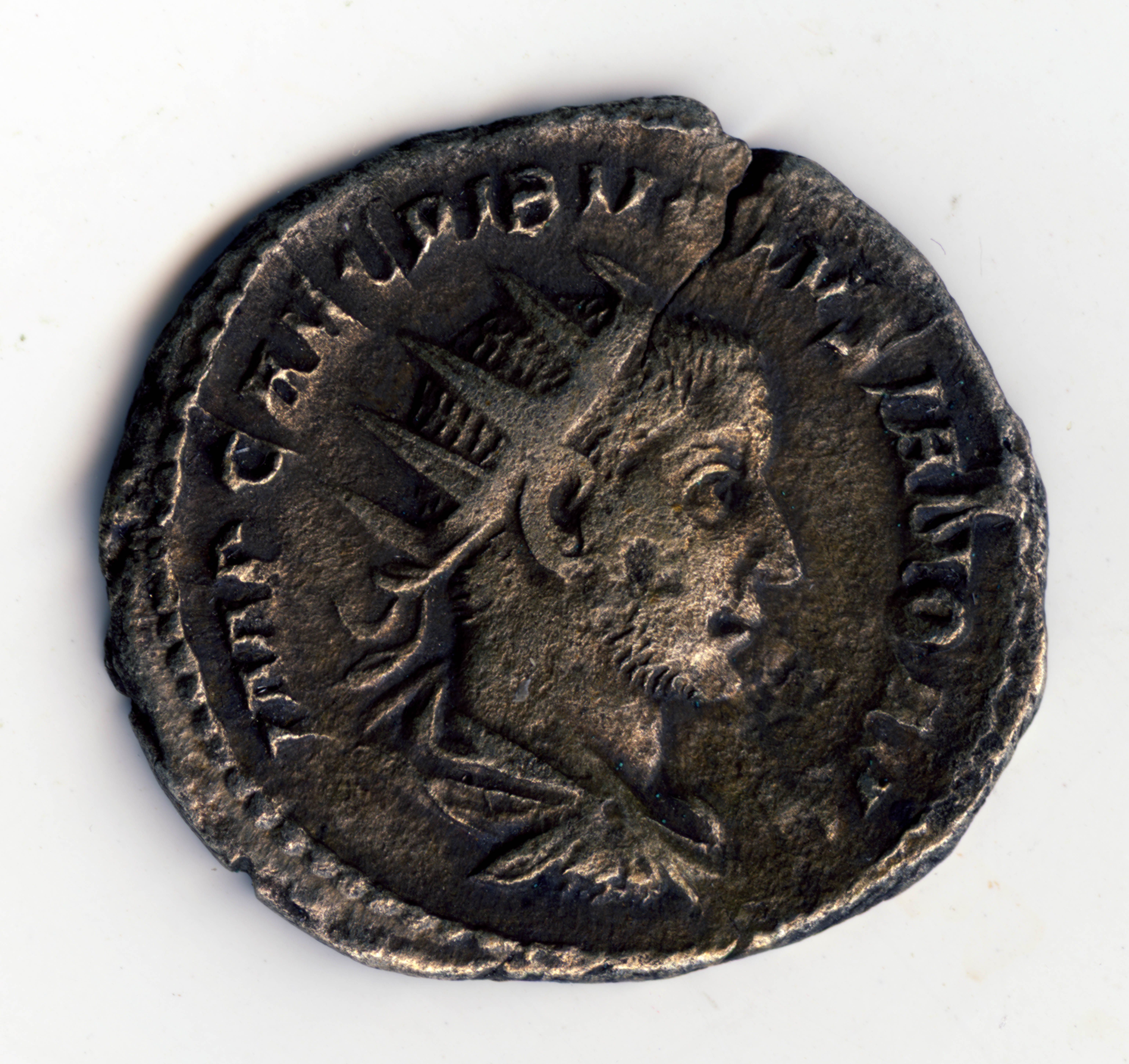 Made out of silver, this coin is under the denomination of Antoninianus. As it is based on Trebonianus Gallus, it is also from the time of his reign, 251 CE to 253 CE. It was minted in Rome, Italy. The observe is the bust of Trebonianus Gallus facing right, draped, and cuirassed. “IMP CAE C VIB TREB GALLVS AVG” is the inscription that engulfs it. 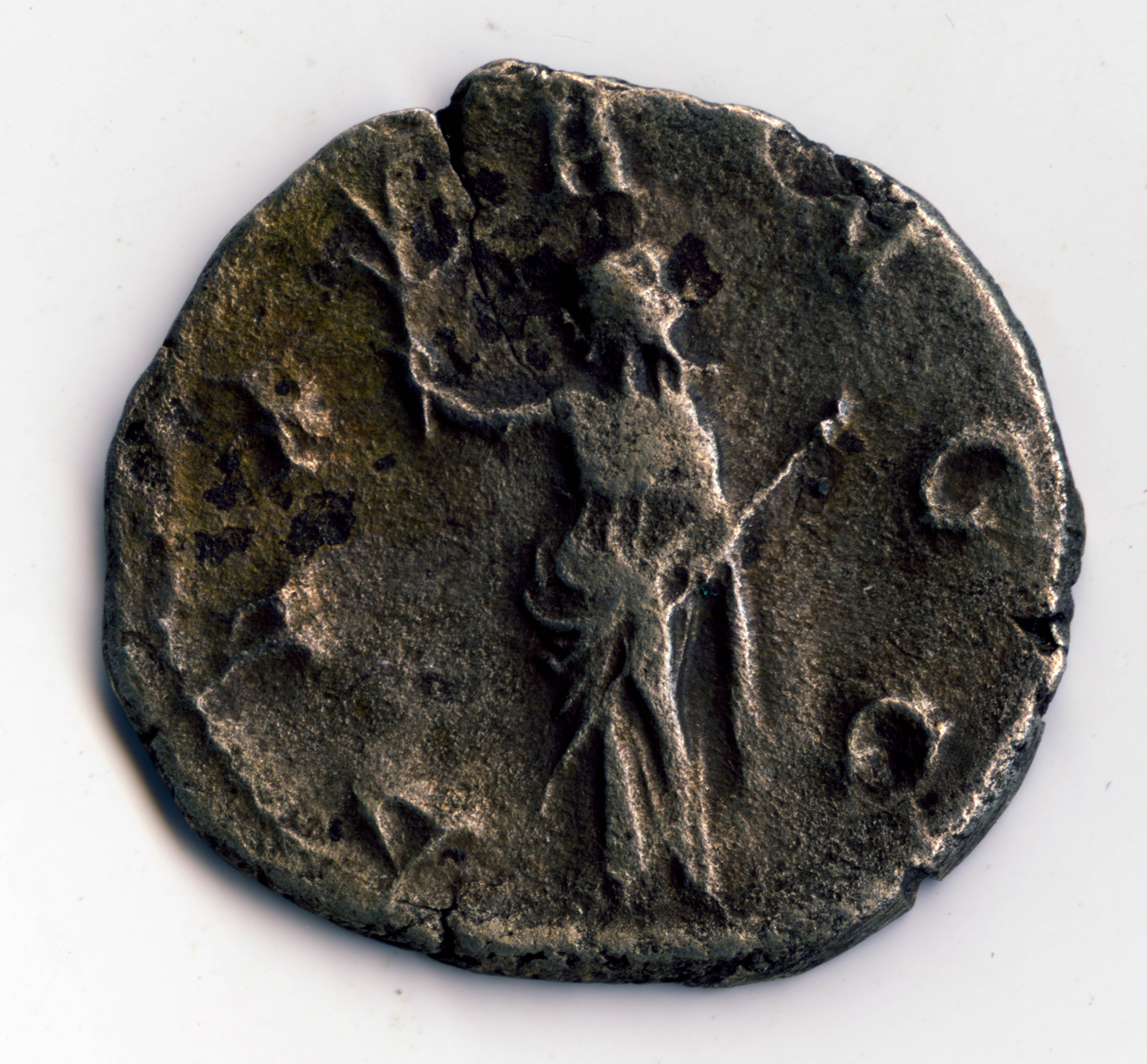 The reverse of this coin shows the goddess Pax, standing, holding a branch in her right hand and a scepter in her left hand. It is surrounded by an inscription that reads “PAX AVGG”. 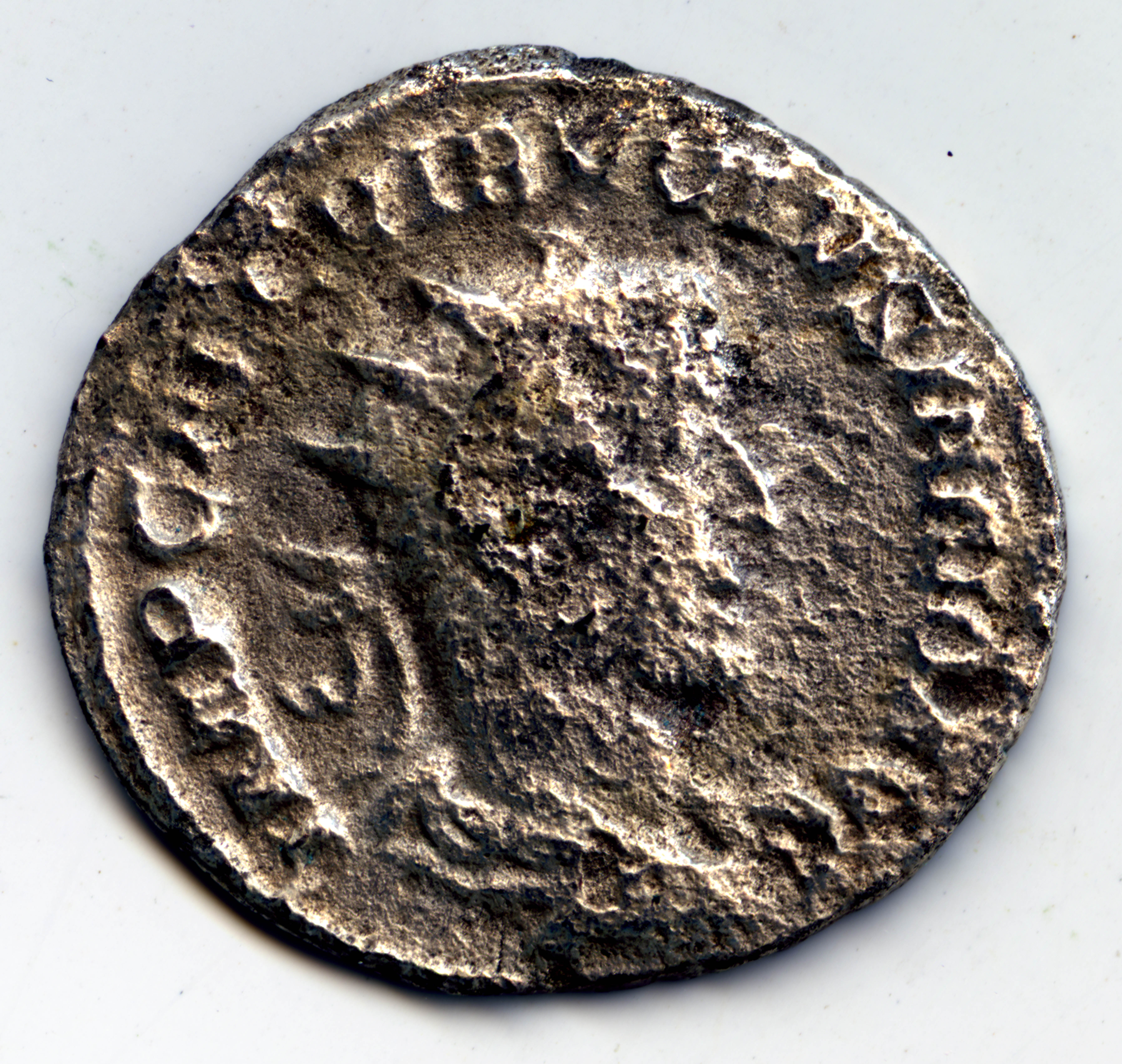 This coin is also noted as being from 251 CE to 253 CE, but is not a representation of Trebonianus Gallus, but rather his son, Volusian who served alongside him as co-emperor. It is of the Antoninianus denomination and made of bronze, though it appears silver in color, and also appears porous which is potentially due to corrosion. It was minted in Rome, Italy. On the observe, there appears to be a bust of Volusian wearing a spiked crown, facing to the right, and also appears to have a beard. There is an inscription that lies around it, listed as “IMP CAE C VIB VOLVSIANO AVG. Due to the possible corrosion, bust features are not able to be made clearly except the nose, mouth, and chin which are easily made out. 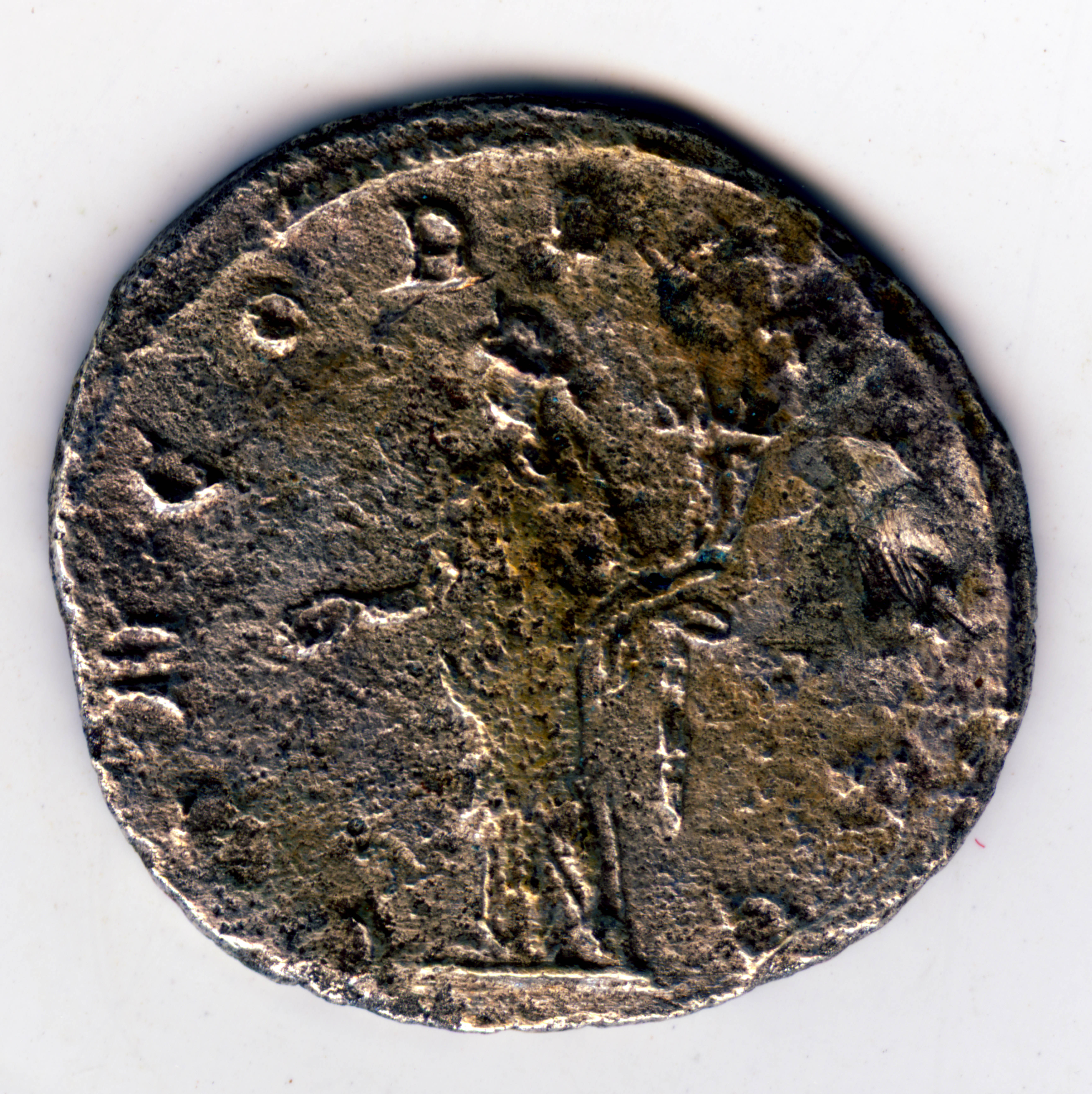 The reverse of this coin depicts a female figure standing facing left. It is hard to tell but it seems like she is holding her right arm outstretched with the palm facing up. She seems to be wearing a crown and holding a cornucopia in her left hand. The inscription “CONCORDIA AVGG” is around the outside of the figure. 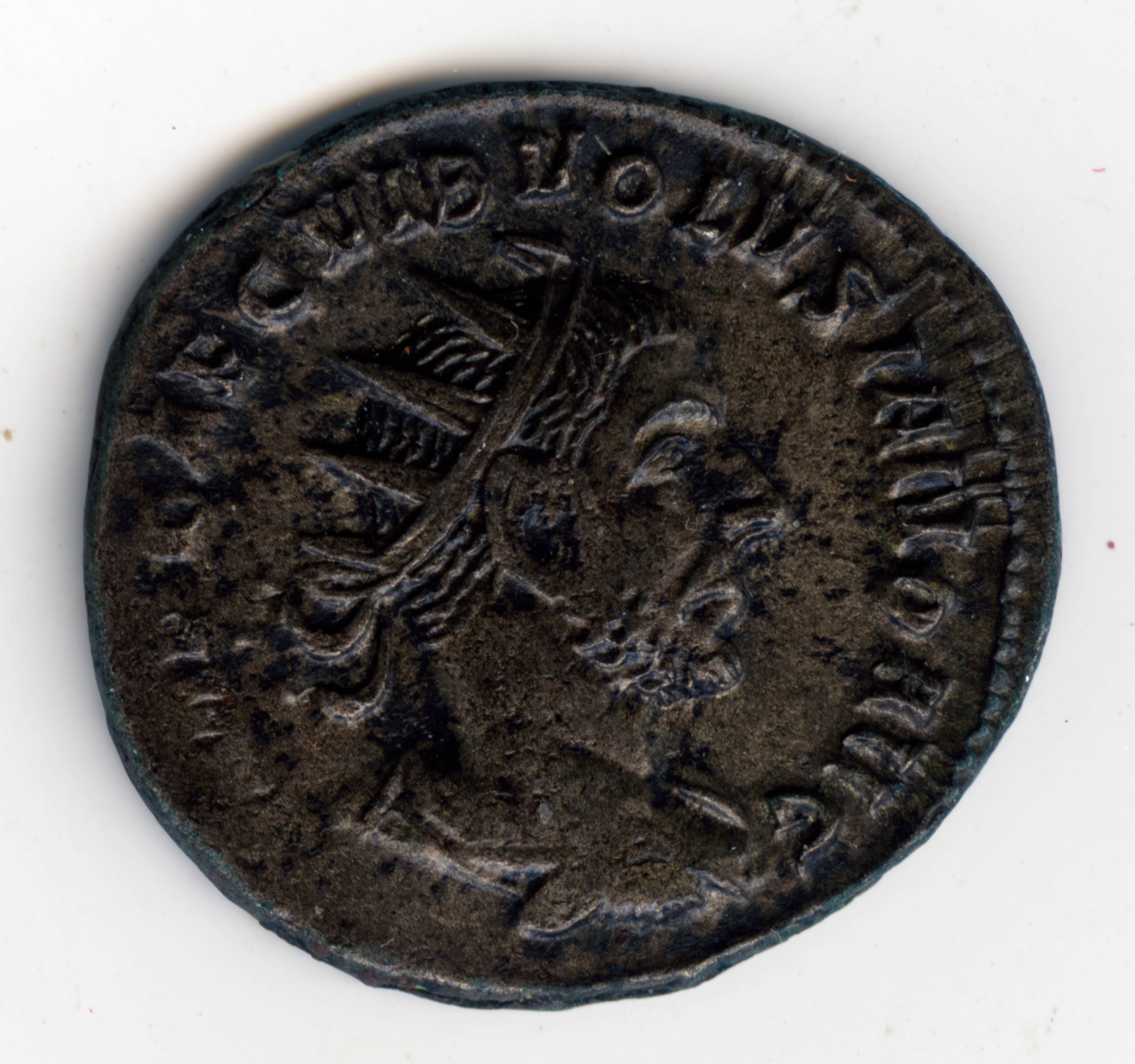 This coin is of the Antoninianus denomination and is made out of silver. It is another representation of the co-emperor Volusian so it is also from the years 251 CE to 253 CE. It was minted in Antioch in the region of Syria. The observe shows a radiate head facing to the right with what seems like a crown and a substantial amount of facial hair. It is encircled by an inscription that reads: “IMP C V AF GAL VEND VOLVSIANO AVG”. 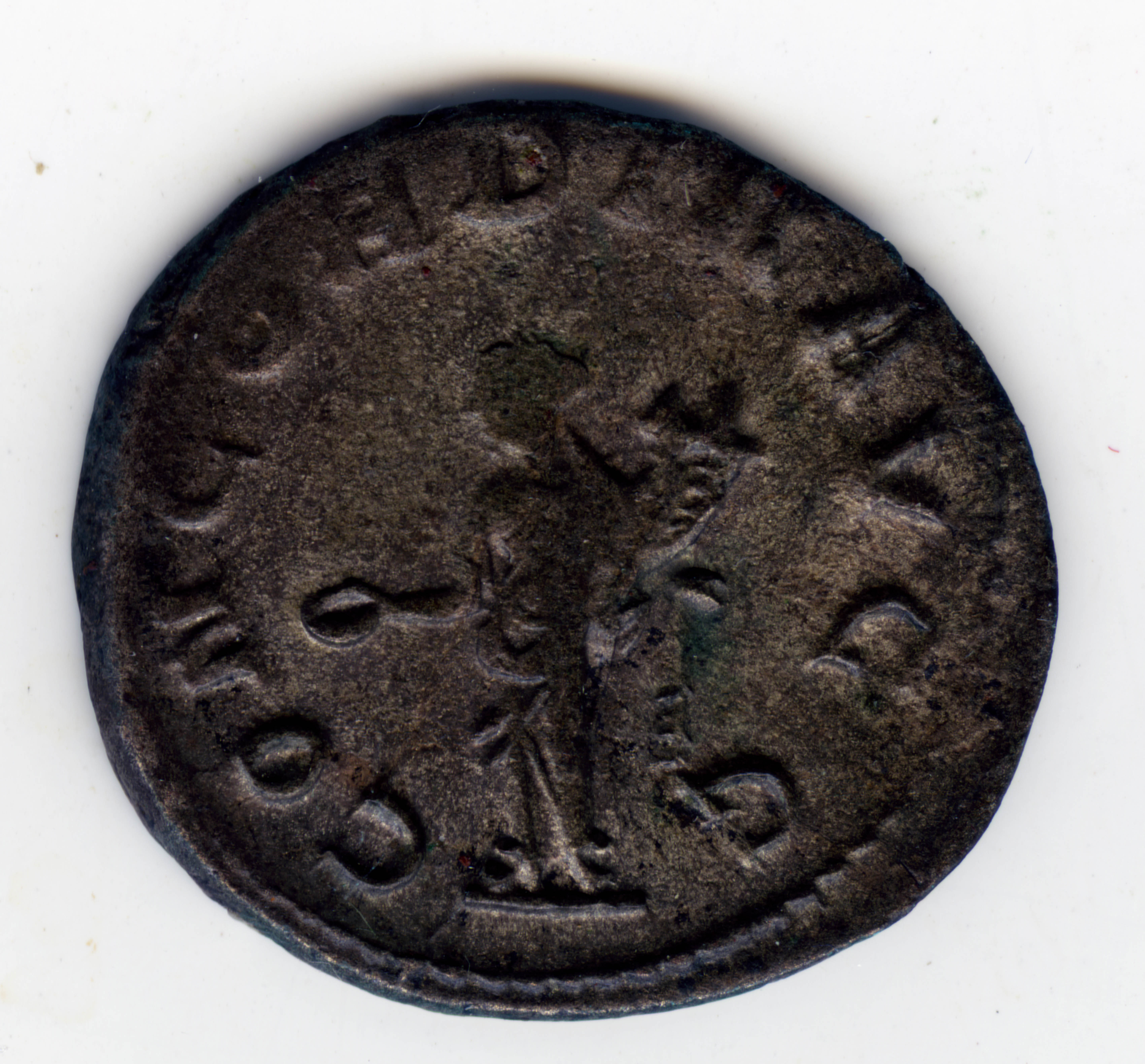 The reverse of this coin shows the goddess Uberitas, who is the Roman agricultural fertility goddess standing towards the left holding a purse in her right hand and the cornucopia in her left hand. Uberitas is covered in drapes and surrounded by the inscription of “VBERTAS AVG”. 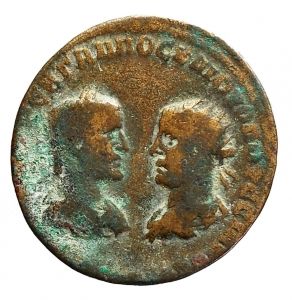 This coin shows the busts of Trebonianus Gallus and Volusianus opposite to each other. The inscription above it is hard to decipher because of the corrosion on the left side of the coin. 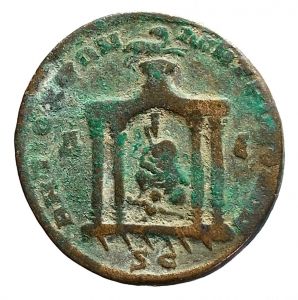 The reverse of that same coin is depicted as Tyche within a tetrastyle temple, under the river god swimming towards the right. It seems as it is made out of brown-green patina. The river god Orontes is swimming beneath Tyche and a ram can be depicted leaping right above the temple. 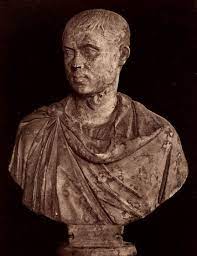 This bust of Volusian, the son and co-emperor of Trebonianus Gallus, depicts him as a much younger version of his father. The facial structure represents the structure on Gallus’ sculpture and it even seems as if the nose is of similar shape. However, his youth is preserved as he seems to lack a beard and his hair seems slightly thicker than his father’s. 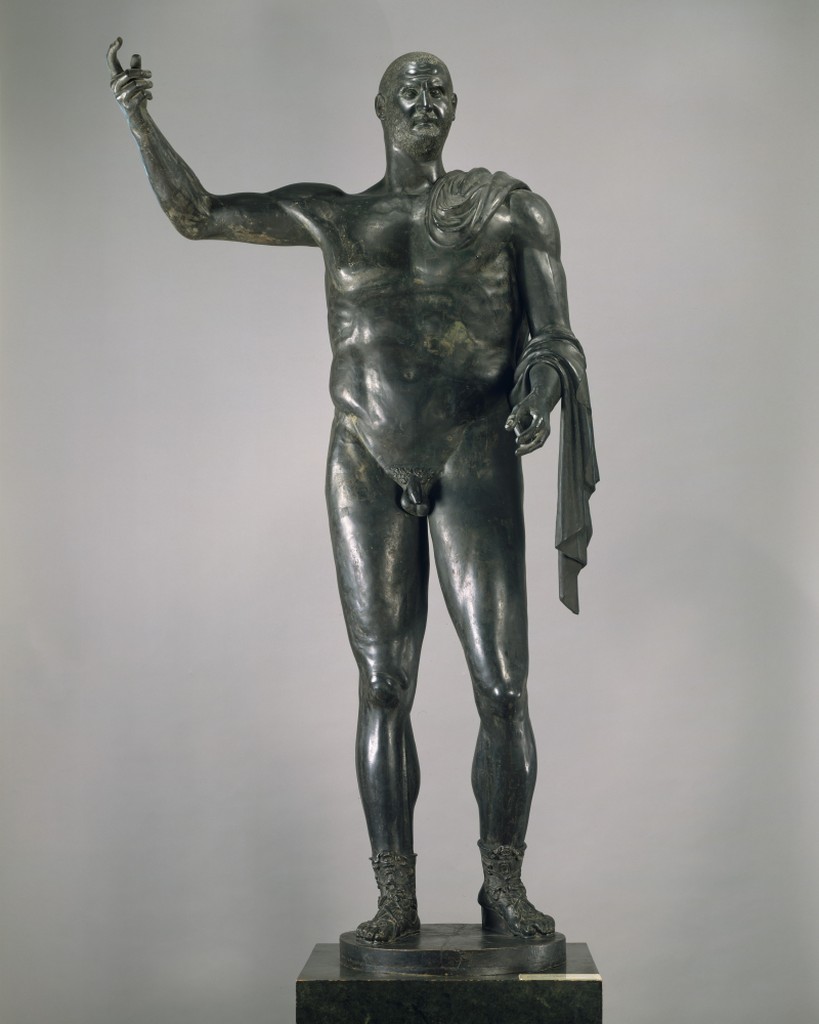 This is statue representing the emperor Trebonianus Gallus in the nude, with only a drape over the left shoulder and above the fore-arm where the elbow is opposite to. His feet also seem to have something on them, maybe footwear or some type of rope wrapped around them. Being in the nude was common for emperors who wanted themselves to be trusted by the people as they were bearing themselves in the open and showing their people that they are not hiding anything. 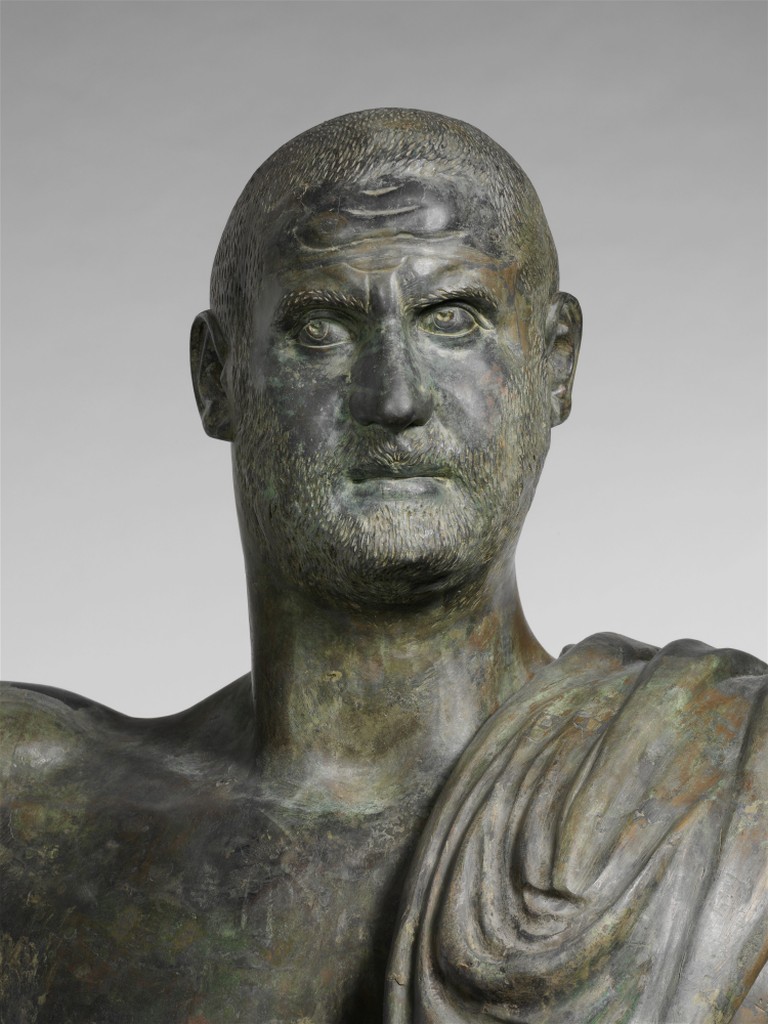 This image is a close-up of the full-body bronze sculpture that gives a better look at Trebonianus Gallus’ facial features. The specks of paint or ink on his head and face are meant to represent hair in lighter amounts without much volume. His position shows that his body is facing towards one way but his eyes are diverted towards another target. It could very well possibly represent the message of himself being present to his empire but always looking forward or being aware of any possible dangers or issues in the near future. 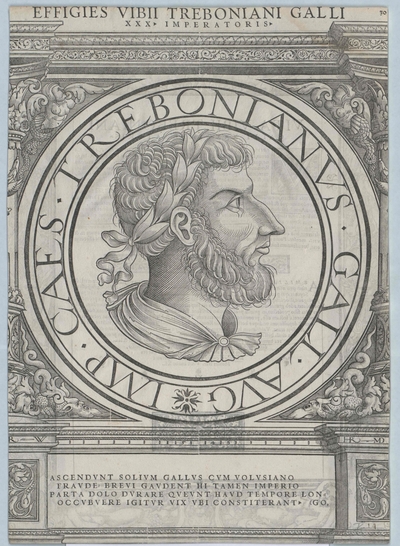 This is a framed print of Trebonianus Gallus which shows him in a different manner from his other depictions in his coins and sculptures. His face holds a different shape and his nose seems to be more elongated. His facial hair and hair are also much thicker and wavier with greater volume than his other depictions. His face in particular seems to have a stronger definition which makes it seem more bonier than the depiction of him on his sculpture which shows his face with more volume and mass.

Most of these coins have a reverse that has some sort of religious imagery. As Trebonianus Gallus was a follower of the Roman culture and beliefs, he worshipped the gods and goddesses of Roman mythology. Given that during his reign there was a large outbreak of a plague that took over many, peace and tranquility was sought after. As a religious character, Gallus decided to incorporate his faith into his minted coins to appeal to the people and give a prayer, in a way. Gods and goddesses that represented natural and necessary virtues were stamped on these coins to represent what the Roman people needed the most during this detrimental time.