Rome's Conversion to Christianity and its Lasting Legacy

Roman Rulers' Relationship with Christianity as Marked by Their Coins

Since its humble beginnings and legendary foundation in 753 BCE by Romulus and Remus, Rome had always been a pagan kingdom, republic, and eventually expansive empire. Massive temples dedicated to pagan gods like Jupiter and eventually deified emperors could be found in any Roman town. However, today’s most popular world religion, Christianity spread like wildfire among the lower classes and eventually even found its way to the Roman emperor’s throne, in part due to the nature of the empire and its vast trade network. Symbols played an important part in this communication network between the earliest Christians while practice of the religion was forbidden.  Similarly, Roman emperors were very intentional in the symbolisms that they used on their coins since it was the most accessible way for them to communicate with the entire population. Like many other aspects of the Roman world we can glean from closely examining coins, we can also trace the history of Christianity within the Roman Empire, including the coins held by the Auben Gray Burkhart Coin Collection, from the pre-Christian emperors to Constantine’s vision and Justinian who made Christianity the official religion of the Roman empire.

Jesus Christ of Nazareth was born during the reign of the first official Roman emperor, Augustus, and was crucified under the reign of the second emperor, Tiberius. Although not as popular while he was living, Chrisitianity steadily gained a following after his crucifixion throughout the empire due to the work of his Apostles, most notably Paul, who were assigned with the task of spreading the Christian message to Jewish, and most importantly, non-Jewish groups. While the glory and benefits of the Roman empire are often highlighted, especially through surviving art forms, there was poverty and intense levels of inequality due to the strict hierarchical system set by Augustus. Christianity was appealing to many members of the lower classes in the Roman empire not only because of its promised liberation from any afflictions encountered in this world but also because of the established community that was totally equal, regardless of social class or gender, through baptismal promise, as highlighted in the letters of the Apostle Paul (Koester 1998).

For the first decades and even centuries following the death and resurrection of Jesus, Christians were massively persecuted on the basis of their beliefs. Since Christianity was a monothesitic faith, demanding exclusive membership, where worshiping any other false, pagan gods was a sin against the Christian God, many Christians perished for failing to pay tribute and sacrifice to pagan gods on festival days or when tested by Roman officials. Because the Christian cult’s practices also appeared to be cannibalistic to outsiders and their doctrinal beliefs in equality were threatening to pre existing Roman hierarchical social orders, the Christians also made an easy target or even scapegoat for emperors. After a massive fire burned down the majority of Rome in 64 CE during the reign of Nero, the emperor blamed the event on the Christians and made a public showcase of torturing and executing the cult’s practioners, which possibly included the Apostles Peter and Paul. 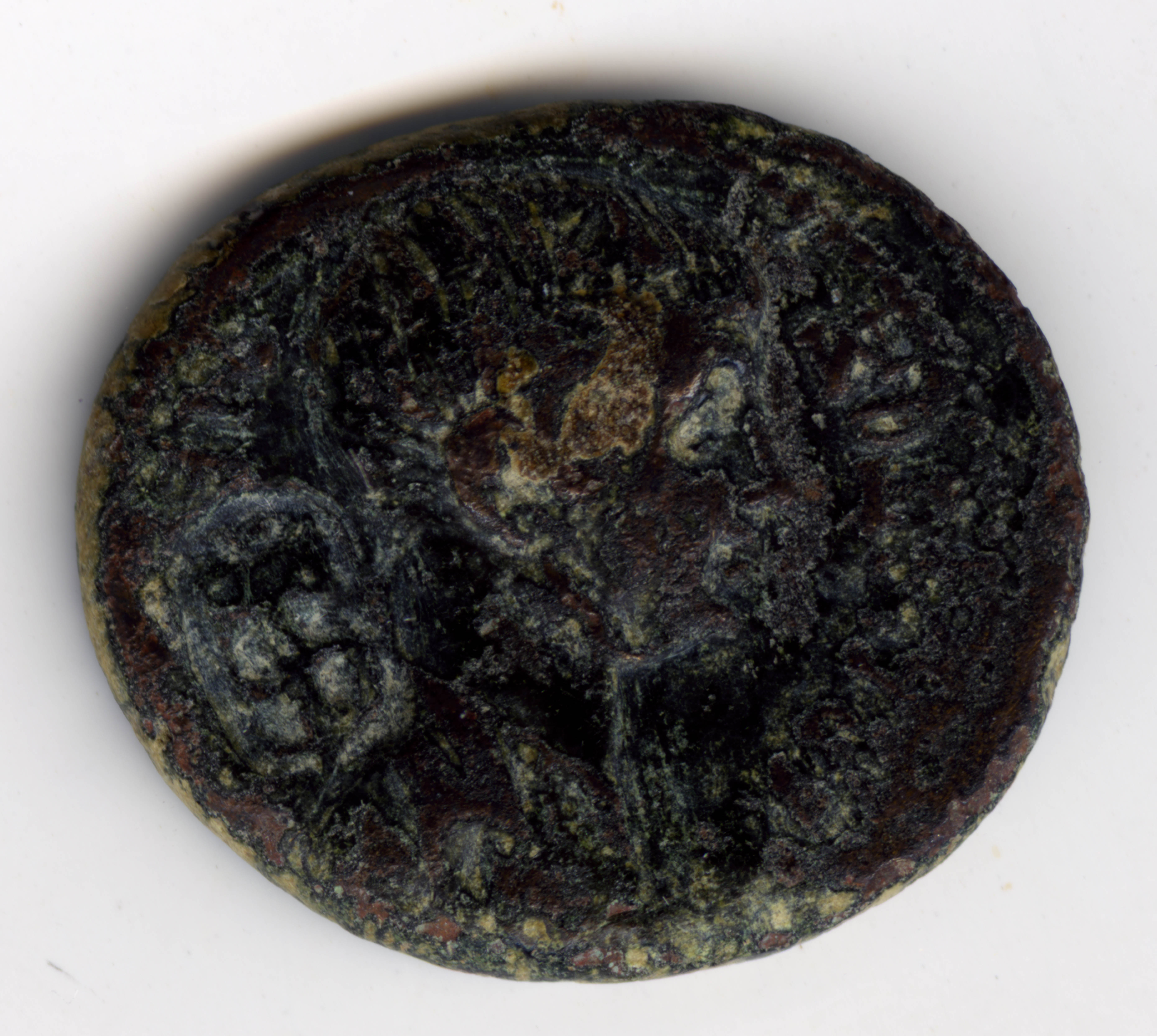 The obverse of the coin shows the bare head of Nero facing right. The coin dates from 54 to 68 CE, around the time Nero carried out the first large-scale persecutions of the early Christians. According to the Roman historian Tacitus, "Nero fastened guilt and inflicted the most exquisite tortures on [the Christians who] were hated for their abominations" (Moss 2017). This included death by crucifixion, the exact same torture device used for the Christian savior. Therefore, the cross not only became associated with Jesus Christ but all the martyred Christians.

The reverse of the coin depicts the god Apollo holding a raven and bipennis. This imagery reflects imperial Rome's relationship with pagan gods, as well as Nero's relationship with Apollo who he "ostentatiously identified himself with" towards the end of his rule (Champlin 2003).

The major turning point for Christianity in the Roman Empire came in the form of a vision to the future unifier, Constantine, nearly three hundred years after the death of Jesus. According to Constantine’s chosen biographer, who was a bishop, an image of a holy sign was presented to him by Jesus Christ that was guaranteed to protect him from his enemies, including his adversaries that he would soon conquer, allowing him to reunify the Roman Empire. After this vision, Constantine legalized Christianity and promoted religious tolerance in 313 CE through the Edict of Milan.

Eyes to the Sky!

On the obverse side of this coin dating from 327 CE, Constantine is seen facing right, wearing a diadem of three bands of pearls, with most importantly his eyes raised to the sky. This is markedly different from any other portrayals of Roman emperors on coinage and directly relates to the legend associated with his conversion to Christianity. According to his self-appointed biographer Eusebius, Bishop of Caesara, in the year 312 CE, Constantine was on campaign when around midday he saw a shining cross made of light over the sun with the text “by this conquer” (Flower 2012). This image, a combination of the Greek letters, chi (X) and ro (P), became one of the most widely used symbols for Christianity.

Despite common belief that Constantine was strictly Christian, some evidence suggests “superstitious” would be a more appropriate term (Madden 1877). In fact, Constantine used pagan gods and goddesses such as Victory and Sol on his coins like emperors prior to him. This coin minted a year after his vision depicts the busts of both Constantine curiassed and wreathed with laurel and pagan god Sol Invictius. His shield also displays a galloping sun quadriga, further reinforcing his association with the sun god. 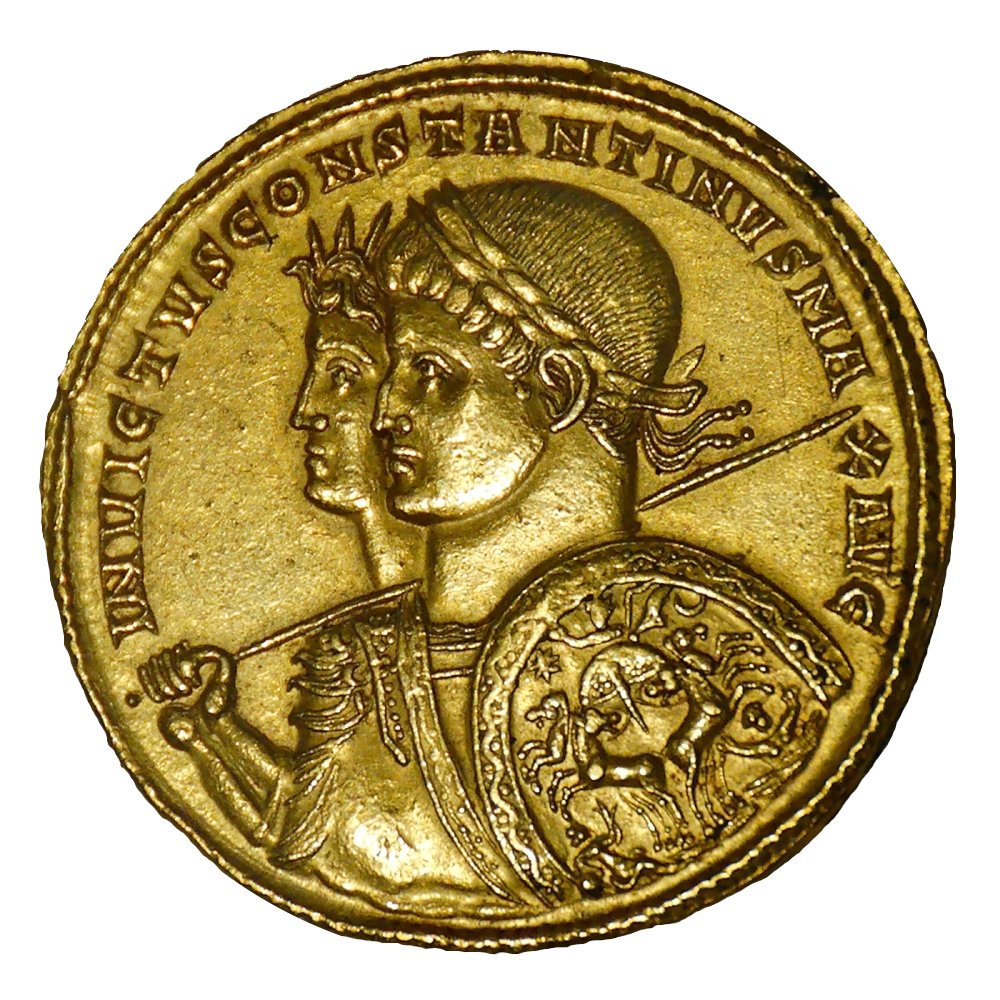 Following Constantine’s vision and the legalization of Christianity, the emperors to follow, like Magnentius, seen on the coin above, started including Christograms on their coins. Magnentius, who was actually very tolerant of and sympathized with pagans, best exemplifies this as seen on the reverse of this coin from around 352 CE. The Christogram takes up the majority of the composition on the reverse, almost as large as his bust on the obverse, making it the “greatest numismatic affirmation of Christianity in antiquity” (Rubin 1998). The Greek letters A and Ω are also seen in the horizontal cross field, a direct reference to Revelation 1:8 from the Christian Bible: “‘I am the Alpha and Omega–the beginning and the end,’ says the Lord God.”

The Legalization of Christianity

Not too long after, in 380 CE, the emperor Theodosius signed the Edict of Thessalonica, making Nicene Christianity the official religion of the state, which confirmed and solidified the influence of Christianity not only on the Roman world at the time but also for the rest of world history. Theodosius was also the last emperor to rule before Rome was once again split between West and East, meaning his legalization reached all territories.

The obverse features a bust of Theodosius facing right wearing a crown with the inscription D N THEODOSIUS P F AVG, translating to “our Lord showing the emperor to be the supreme ruler, Theodosius, dutiful and wise Augustus.” Theodosius was the Roman emperor who made Christianity the official religion of the Roman world. History credits him as the one presiding over the beginning of the end of paganism and the champion of Christian orthodoxy (Errington 1997). 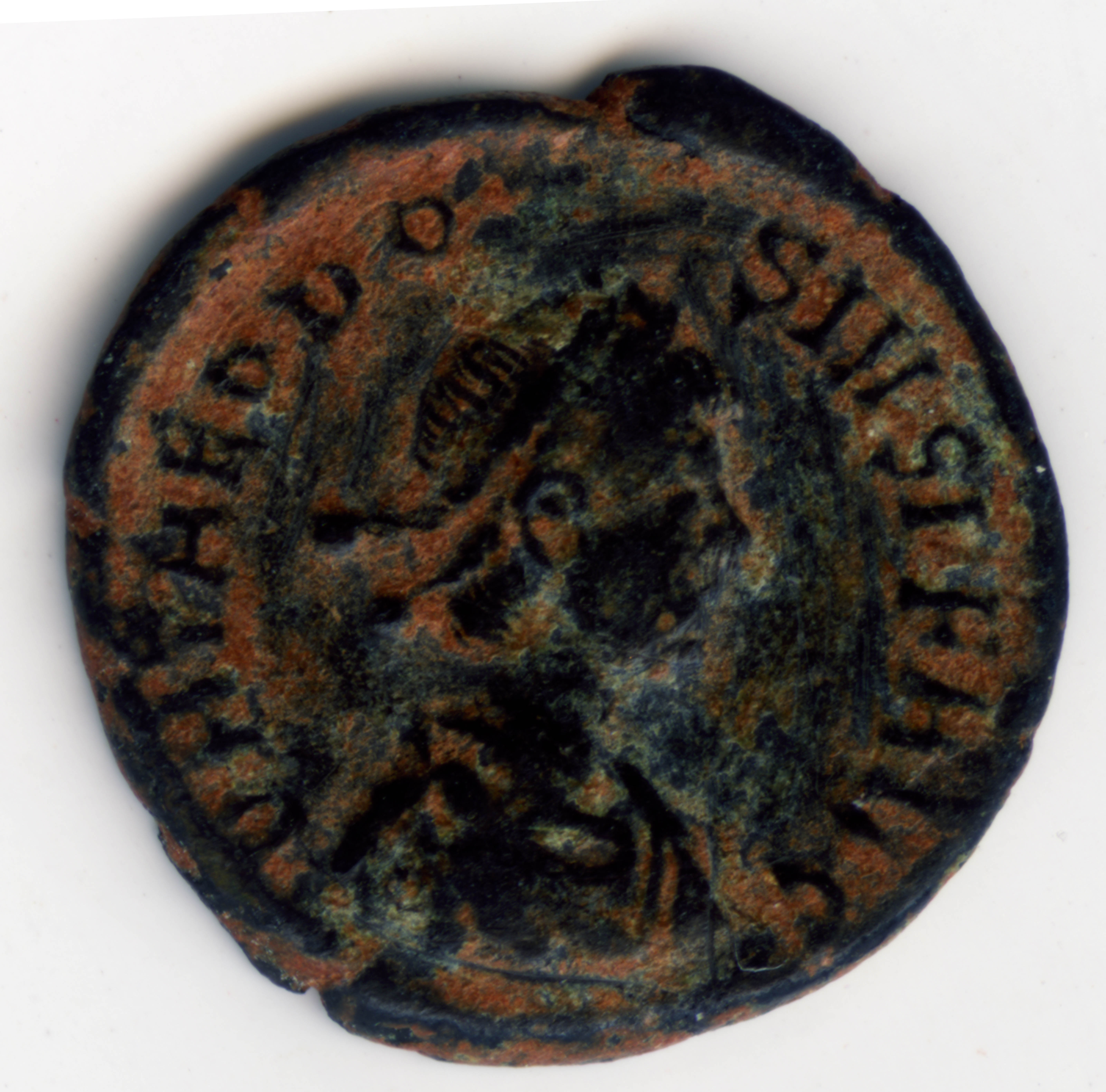 The reverse of this coin portrays the pagan goddess Victory advancing left, carrying a trophy and dragging a captive, with the inscription SALVIS REIPVBLICAE, meaning “Salvation of the Republic.” There is also what appears to be a Christogram in the middle of the composition just to the left of Victory. While Theodosius is commonly portrayed in history as ridding the empire of traces of paganism, this coin raises an important juxtaposition regarding the continuation of images of Victory in early Christian art, until she is eventually replaced by images of angels (Dubois 2016). 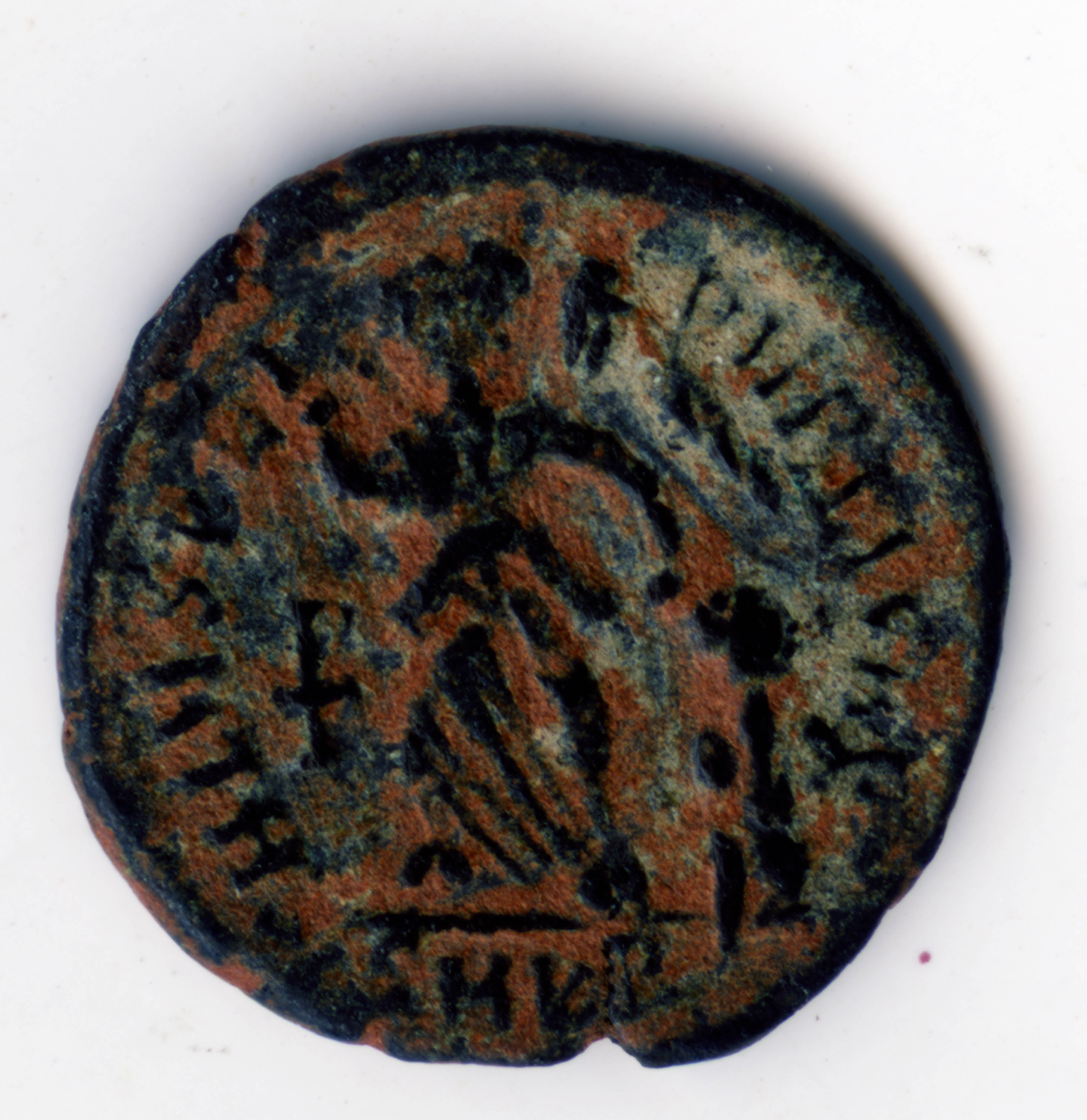 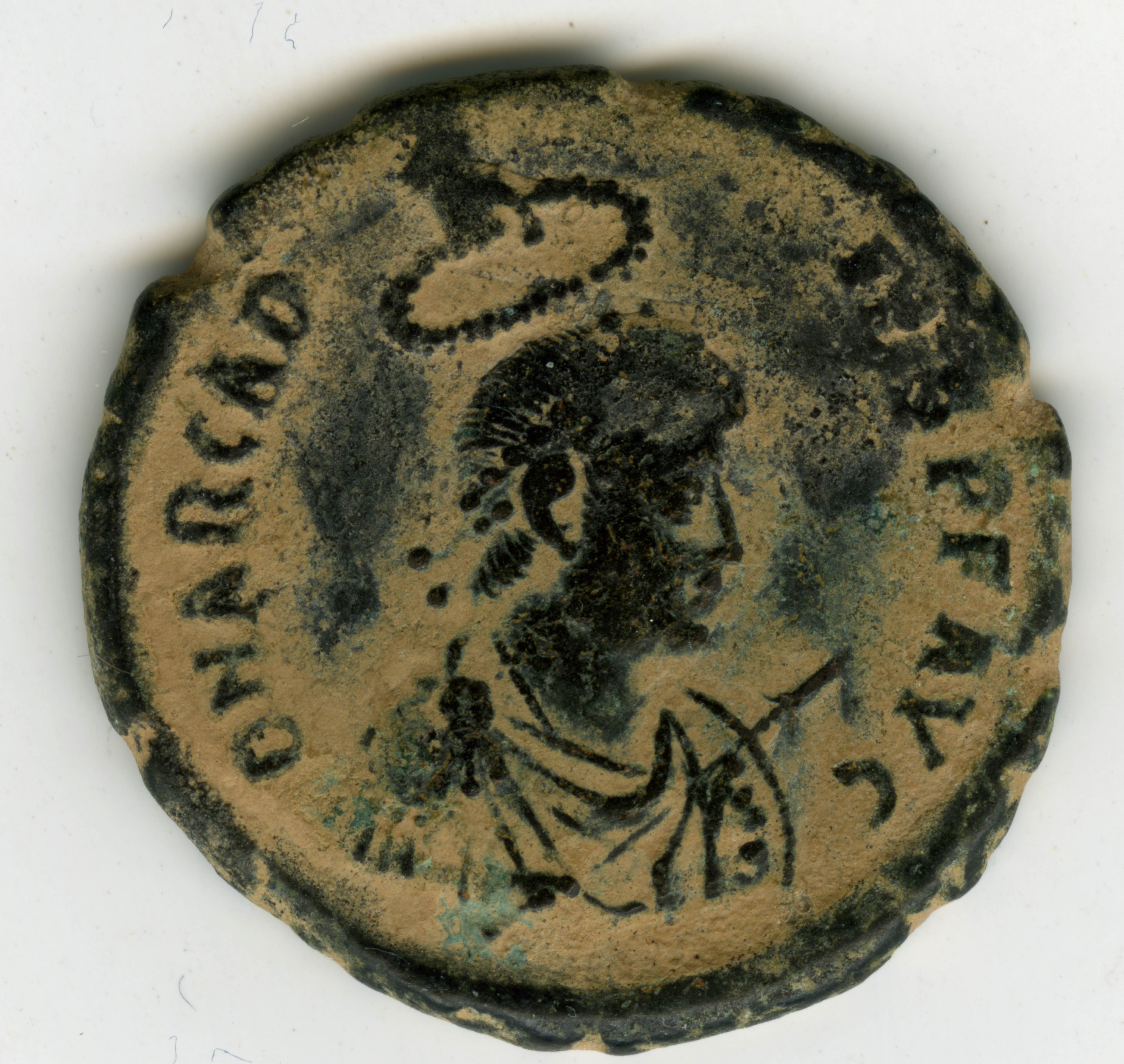 This obverse shows a diademed, draped, and cuirassed bust of Arcadius, the son of Theodosius, facing right, holding a spear and a shield. In the top of the composition, the hand of God descends from heaven to crown Arcadius, representing Christian emperors’ propaganda suggesting to their followers that their rule was legitimized by God’s command (Manders 2020).

The reverse of coin 20 shows Arcadius, standing and facing left, holding a standard and leaning on a shield. To the left of the emperor is also a kneeling captive and a cross, reinforcing Rome as a Christian empire as well as the cross as a protective symbol in military contexts, as established by the first Christian emperor, Constantine (Serrano del Pozzo 2021).

Justinian I is considered the first great ruler of the Byzantine empire, which carried the lasting legacy of Roman world until 1453 when the empire fell to the Ottoman Turks. Justinian reclaimed much of the western Roman empire and regions of northern Africa, spreading Byzantine and Eastern Orthodox Christian culture throughout the Mediterranean. He also established the expectations of Byzantine rulers to follow, making them both the leaders of the Eastern Orthodox Church as well as the overseers of political affairs for the empire. He also made certain stylistic choices that would greatly influence the rest of Byzantine and medieval art to come in the form of icons and important architectural plans, like the glorious Hagia Sofia in modern day Istanbul.

Coin 19 is one of the standouts from the collection since it is made totally out of gold. The obverse shows Justinian helmeted and curiassed, with a Christian cross prominently placed left of his head. Justinian is often regarded as the most famous and important Byzantine emperor, having reunited former Roman territories across the Mediterranean under his rule. In order for him to ensure stability among these different regions, Justinian believed religious unity was necessary to maintain political stability. Therefore, he sought to destroy paganism and conducted councils to promote unity among four orthodox sects of Christianity (Meyendorff 1968). Stylistically, it is also important to note that Justinian curiously portrays himself looking straight ahead rather than in profile. This choice sets his and the Byzantine style apart and paves a new road for self-representation in Byzantine art to follow.

The reverse shows a winged figure, an angel rather than a pagan Victory, holding a jeweled cross and orb with a cross attached. Crosses as Christian symbols obviously play an important part in Justinian's coinage. Angels also became an important artistic feature in Justinian’s and Byzantine art in general, best exemplified by the mosaics in San Vitale in Ravenna, Italy, where winged angels frame Christ as Justinian and his wife, Theodora, present the sacramentals associated with the Christian sacrament, Eucharist (Farber 2015).

Justinian II set the precedent of moving the image of the emperor to the reverse and placing the image of Christ on the obverse, as seen in this coin from 692-695 CE (Kazhdan 1991). On the obverse, Jesus Christ is depicted raising his right hand in benediction and holding the Gospel, while the edges of the cross project from behind his head. The inscription reads, “Jesus Christ, King of Kings.” On the reverse, “Justinian, servant of Christ” is inscribed while he stands wearing a crown with a cross and holding a cross potent. This important stylistic shift represents the full evolution of Christianity within the Roman world, from the subject of persecution to gradual acceptance and representation to eventually becoming the forefront of subject matter and dethroning designated spots for the rulers that were first standardized even prior to the birth of Jesus Christ.