An examination of Livia's Influence Via Female Representation in Roman Coins 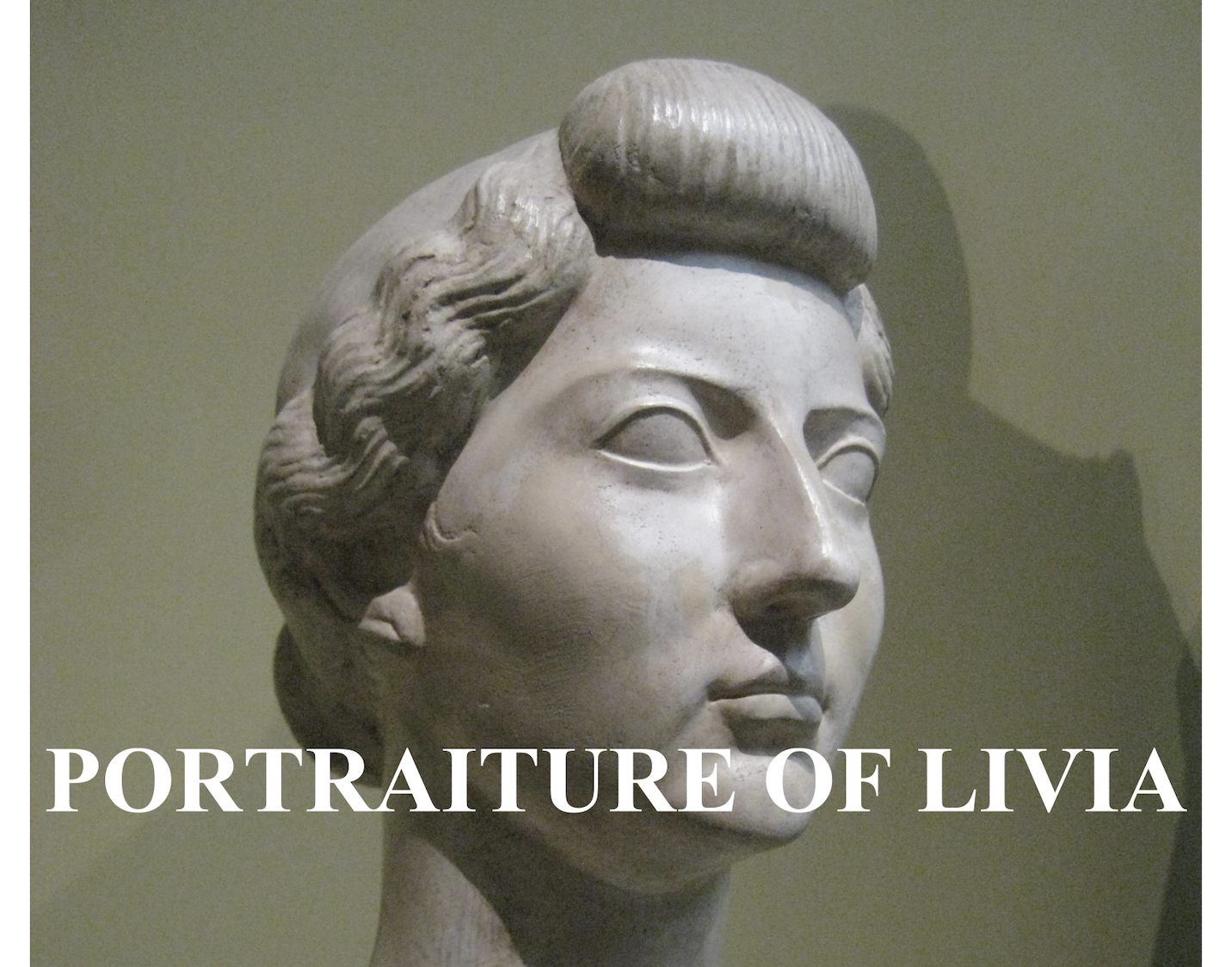 An Overview of Livia's Influence

Livia Drusulla, who became Julia Augusta after her marriage to Augustus, lived from 59 BC to 29 AD. Her prominent legacy is tied to her marriage to the emperor Augustus and the power and artistic influence that marked the Age of Augustus [Coin #1, #2]. Imagery and portraiture in coins that extend beyond the Age of Augustus [Coin #9] from both external collections and the Auben Gray Burkhart Collection here at Rhodes, give meaningful insight into Livia’s influence in Rome as well as the scope of her control over the use of her own portraiture. More broadly, the context that Livia’s portraiture provides allows for a deeper understanding of the use of the female portrait and body as they pertain to patriarchal influence.

Livia’s features in her portraiture were emulated by imperial women for centuries after her death, which amplified Augustus’ political legacy and the cultural programs he established. Historically, Livia had few precedents in terms of powerful female representation; thus an examination of Coins #4, #5, #6 elucidates the influence in the selection of the features in her standardized portraiture. Further, such an examination explicates the importance of her mothering of and proximity to male emperors [Coin #3, #7] and implicates the likelihood that, despite her elevated power, she was still a means of the continuation of patriarchal, imperial dynastic power.

The overarching and broadly complex question that remains when examining Livia’s influence in this coin exhibit is, “Did Livia have autonomy over the use of her portraiture or perception?” Writers like Tacitus and Suetonius painted Livia to be an overbearing and cold woman. Thus, because there are no first-hand accounts from Livia herself regarding her portraiture, power, or person, coins and busts must be analyzed as a primary sources that do not get to speak for themselves. Contextual clues in coins including other representations of women indicate that the female body unsurprisingly served as a means of bolstering patriarchal and militaristic victories [Coin #10, #11, #12]. Additionally, the features that mark Livia’s portraits align with the stoic and familial values of Augustus’ rule [Coin #6, #8]. These selections were not coincidental and favored the suppression of female autonomy [Coin #3]. Given the lack of further records regarding her personhood and the contextual clues gathered from these coins, it was likely that the scope of Livia’s influence over her portraiture was limited. Nonetheless, today she is highly regarded as one of the first women on record to gain power in the Roman Imperial dynasty by means of her own savvy and wit.

Pictured on the obverse of the coin is Livia Drusilla’s side profile, typical in coins containing her portrait. Below her profile lies the inscription “IVSTITIA” which translates to “justice.” As a ruler, Augustus strived to rule with justicie within the Roman Empire. Livia’s power as Augutus’ wife was characterized by her role as an adjacent figure to her husband’s rule. By changing her name to Julia Auguta after her marriage, her influence was linked to Domus Augustus, or the house of Augustus, and the air of verity, honor, and justice that Augutus wished to portray.

SC, similarly seen on all coins containing the portraiture of Livia, indicates that the currency was Senatus Consulto, or “by decree of the senate.” Including such an inscription on a coin with Livia’s portrait helped cement in the minds of the Roman public Livia’s status. Although Livia’s status gave her financial and social independence before her marriage, Livia’s autonomy in the Roman Republic was linked to her marriage and connection to her husband, Augustus.

The obverse of this coin bears the face of the emperor Augustus, Livia’s husband. In the discussion of Livia’s portraiture and her control over such, it should be noted that Livia’ portraiture could have served solely as means of propaganda for Augustus’ influence, rather than a tool under her control. Although Livia is seen operating outside of the patriarchal rules imposed on women, she likely did not have autonomy over the use and distribution of her image, given the scope of Augustus’s power. Livia’s features and stylistic choices, as discussed with Coin #5, were aligned with signifiers of Augustus’ rule, indicating that her portraiture was controlled by her husband. This can be seen clearly even just within the Auben Gray Burkhart Collection that contains no coins with Livia's portrait, but twenty-nine that either mention or feature Augustus.

The laurel wreath, seen woven around Augutus’ name at the perimeter of the coin, was a Greek symbol that the Romans adopted for their own use. Partially a result of reverence to Greek culture, laurels were often worn to symbolize militaristic victories. In determining her own portraiture, Livia too drew from Greek inspiration. Given the lack of Roman female predecessors from which she could copy traits, Livia instead looked to Greek goddesses and Hellenistic queens in selecting features for her portraiture that might have resembled her likeness but also aligned with the political ideals of her husband. 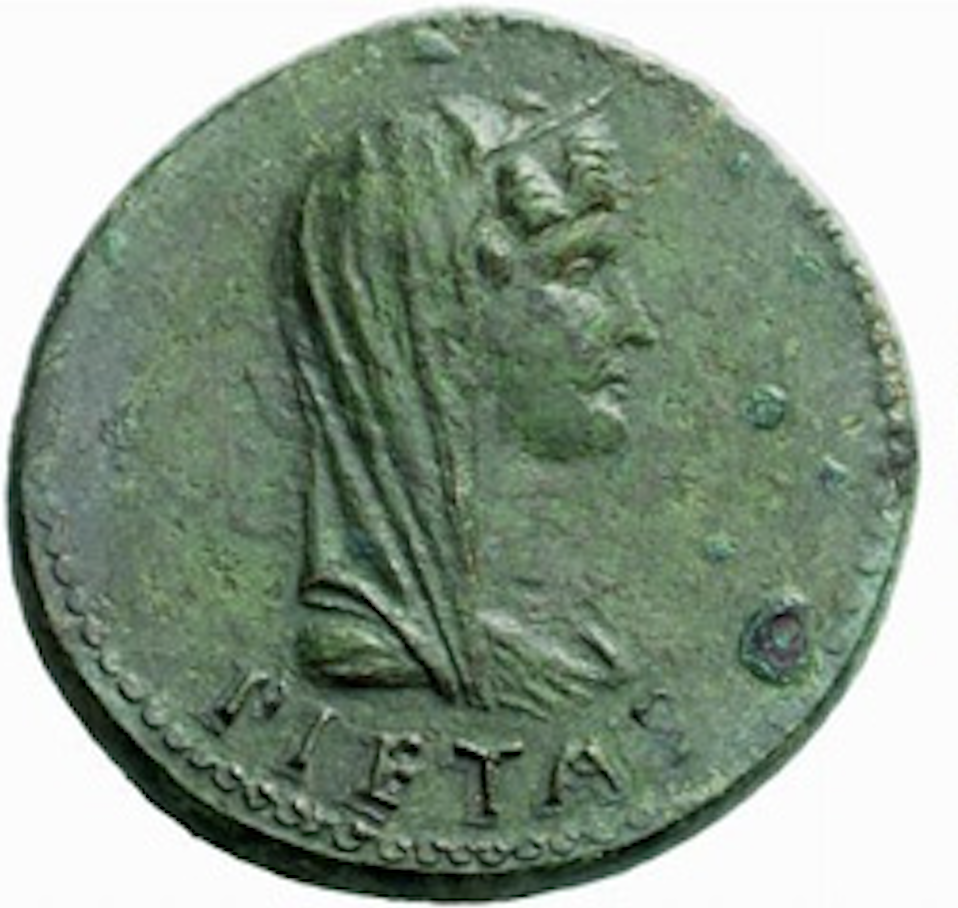 Cleopatra, the Greek Queen, was Livia's only predecessor in terms of female representation on coins. Livia’s portraiture on Roman Imperial coins cemented her role as Rome's first true matriarch, and thus amplified her role as the standard for Roman women. Livia’s choices regarding hairstyle and dress were widely emulated by Roman women who saw her as the ideal in terms of motherhood and piety. Her representation, particularly her facial features, were used posthumously to represent allegiance to Augutus’ rule. Each of her features was meant to represent different facets of the emperor’s reign. The simplicity of her features and the smallness of her mouth both were representative of her virtue, while her large eyes draw reference to the Ptolemaic predecessors of ancient Greece. In comaprison, Cleopatra's representation and features indicated her intellectual savvy and cunning nature.

The inclusion of Livia’s portraiture on Roman coins did not serve a solely altruistic purpose for Augustus. Livia’s role was weaponized against Roman women to reinforce their roles in a domestic setting. Augustus’s push for traditional values within the Roman empire, framed as the preservation of familial values, enforced strict marriage and moral rules that outlined a push for procreation and behavioral rules. While these rules existed for Roman women, Livia’s power placed her above such stipulations. She and Augustus never bore a child together.

Female representation on coins outside of portraiture of emperor’s wives proves to be limited. Coin 023 exemplifies a female figure adorning the emperor Aurelian with a laurel wreath. As mentioned, laurel wreaths exemplified militaristic accomplishments, thus identifying Aurelian as a glorified victor in the eyes of the people. The role of the woman here is subjugated to the role as an accessory to the emperor’s glory. A quote by the tribune L. Valerius concisely summarizes women’s roles in such a society in saying, “No offices, no priesthoods, no triumphs, no spoils of war. Elegance, adornment, finery—these are a woman’s insignia, these are what our forefathers called the woman’s world.” While Livia held more power than the everyday Roman woman, it should be remembered that at all levels, women's power was stifled under the Roman patriarchy.

The woman featured on this coin is Victory, the Roman representation of the Greek goddess Nike. Both Nike and Victory served in iconography as winged, female representations of male victories is battle. In both Greek and Roman goddess representations, the female figures do not have an intrinsic identity within their representation but rather are used as a means of supporting male authoritative narratives. The use of Victory and Nike perhaps both serve as a parallel to the Livia's representation in which her imagery served to bolster the narratives of Julio-Claudian rulers.