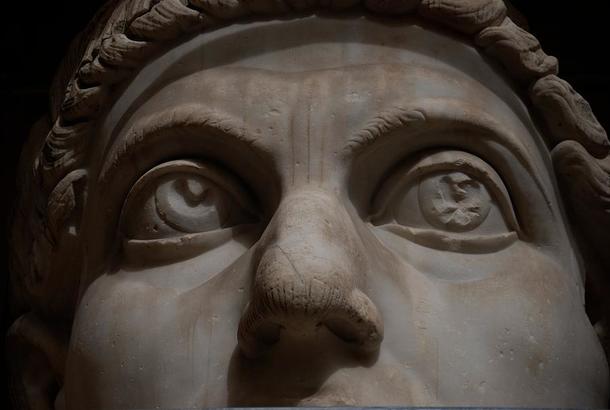 The Divergent Depiction of Roman Emperors

If the 1950s had Marilyn Monroe, the 1960s had Jackie Kennedy, and the 1980s had Princess Diana as faces of the era, ancient Rome had their emperors.

Roman emperors were the ultimate celebrities in the Roman Empire, thanks to their power and political significance, and their portraiture is the best-known element of ancient Roman art. There is great diversity in the depiction of Roman emperors in portrait sculptures and coins throughout the centuries of the Roman Empire. It results from divergent political messaging, deliberate propaganda, and artistic choices.

This exhibit will take viewers through the artistic depiction of five Roman emperors in coins from the Auburn Gray Burkhart Collection and other sculptures. The chosen emperors are Constantine, Trajan, Augustus, Severus Alexander, and Nero. They belong to different dynasties (apart from Augustus and Nero), eras, creative periods, and centuries. The exhibition s deliberately organized in a non-chronological order to focus specifically on the artistic choices, and the subliminal messaging. It will reveal some of the intriguing propaganda behind the depiction of the emperors and the relevant historical context behind these long-existing and iconic works of Roman art.

The measured abstraction of Constantine the Great 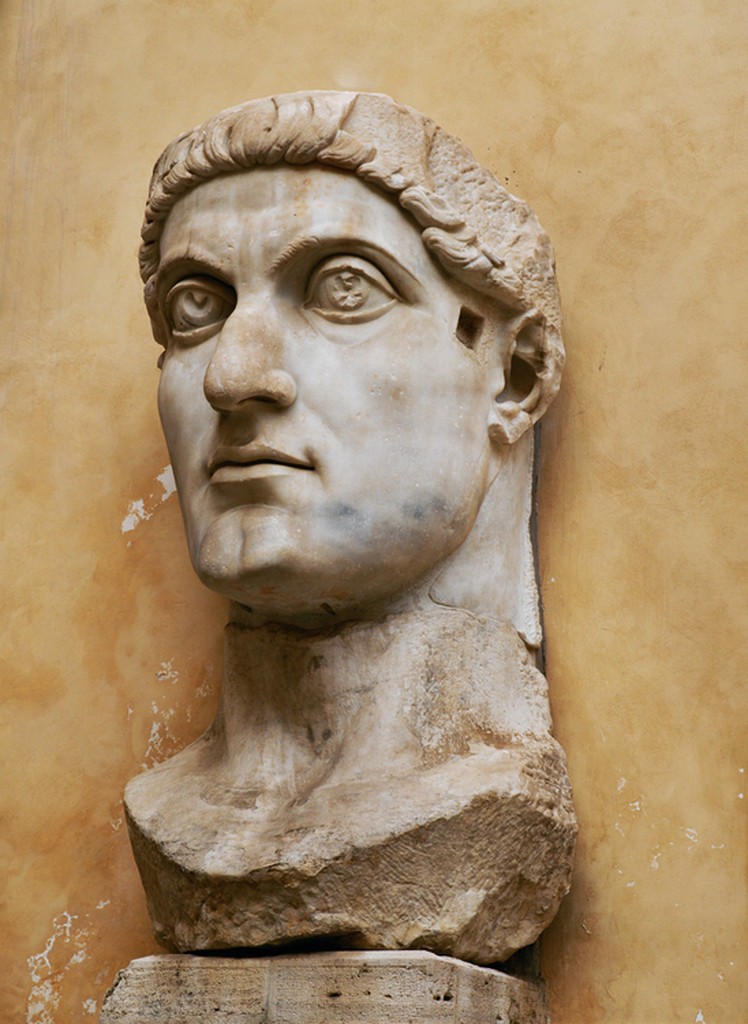 The Colossal Portrait of Constantine the Great, reflecting a sense of simplification and abstraction
ca. 325 CE, marble, from the Basilica Nova, Rome. Musei Capitolini, Rome

Constantine the Great remains one of the most consequential emperors in ancient Roman history because of his legalization of and later conversion to Christianity. His reign (jointly from 306 CE to 324 CE, unilaterally from 324 CE to 337 CE) is seen as the start of the Late Antique period. The Late Antique period is the transition period between Classical Antiquity and the Middle Ages in Rome. Constantine's portraiture notably conveys a sense of simplicity and veers on the border of abstraction, a trend that continues in the Late Antiquity period.

Hints of abstraction is seen in his iconic colossal marble portrait, placed initially in the Basilica Nova in Rome. Notably, his large, deeply cut eyes dominate his face and are the feature that engages most with the viewers (Tuck 374). His face is smooth and carved in simple planes with minimal creases. The subtle modeling of the cheek and brow gives a simplified look and a sense of naturalism, which keeps it from being comically abstract (Wright 505). The bowl cut hair is reminiscent of Trajan, another Roman Emperor whose portraiture will be examined in this exhibit. 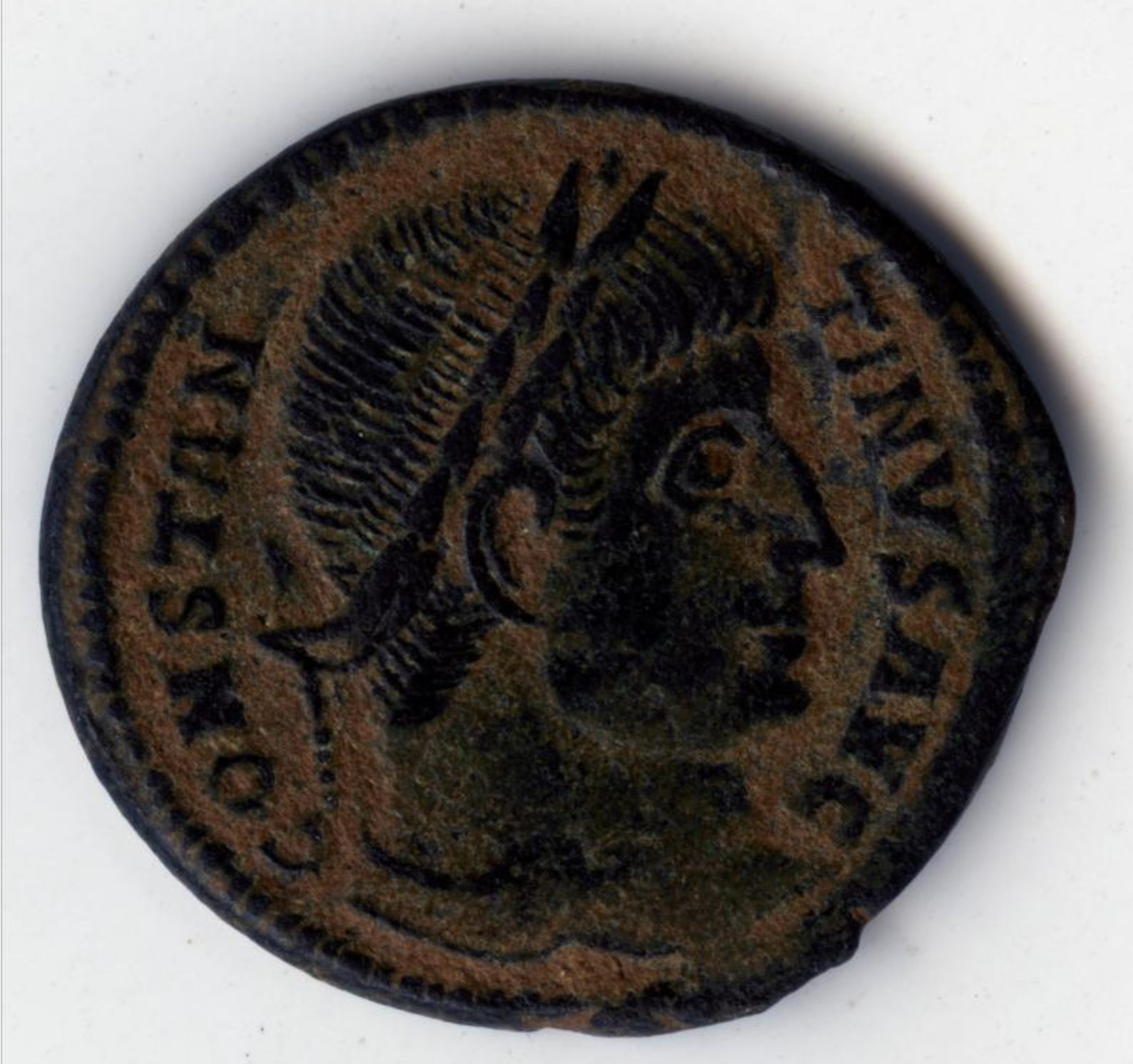 Obverse side of a coin showing Constantine the Great, dating from 307-227 CE. The coin shows Constantine with his trademark short hair and his smooth face. His eyes are larger in proportion to his face. This coin is part of the Auben Gray Burkhart Collection at Rhodes College.

This coin, which is part of the Auben Gray Buckhart Coin Collection at Rhodes College, contains some similar features to the colossal portrait. The similarities prove that there was overall cohesion in the way Constantine was depicted in his portraiture, a trend observed throughout every emperor in this exhibit. In the coin portrait, Constantine's face is still clean-shaven and largely smooth. Constantine's eyes are more significant in comparison to the face, and continue lending a sense of abstraction. The face can overall be described as largely simplistic, a deliberate choice and trademark of Constantine's portraits (Wright).

Obverse of a Trajanic Denarious from 98-117 CE featuring a bust of Emperor Trajan. The coin is primarily made of silver and shows Trajan with his trademark clean shaven face and short haircut. Trajan looks middle-aged in the portrait, signifying a lack of eternal youthfulness.

Trajan (Marcus Ulpius Traianus) was the first Roman emperor from outside of Italy. His reign lasted from 98-117 CE. Before becoming emperor, Trajan was legendary as a successful general for over 20 years (Tuck). This military prowess helped him expand the Roman empire to its zenith. He remained an active military commander while in office, and launched an extensive and largely successful military campaign against Dacia, which is commemorated in the art and architecture he commissioned.

Trajan inherited a complicated legacy of imperial imagery from the Emperor Domitian of the Flavian dynasty (Roche 41). Domitian's legacy was a largely controversial one and his images were vastly erased from Roman consciousness. To counter that, Trajan's imagery reflects his military genius and discipline. The most important element of his portraits is his "clean shaven, calm, relatively smooth face topped with a cap of hair combed down straight all around" (Tuck 238). This hairstyle is seen in the above coin, and in his portrait below, where he is depicted as a military general. 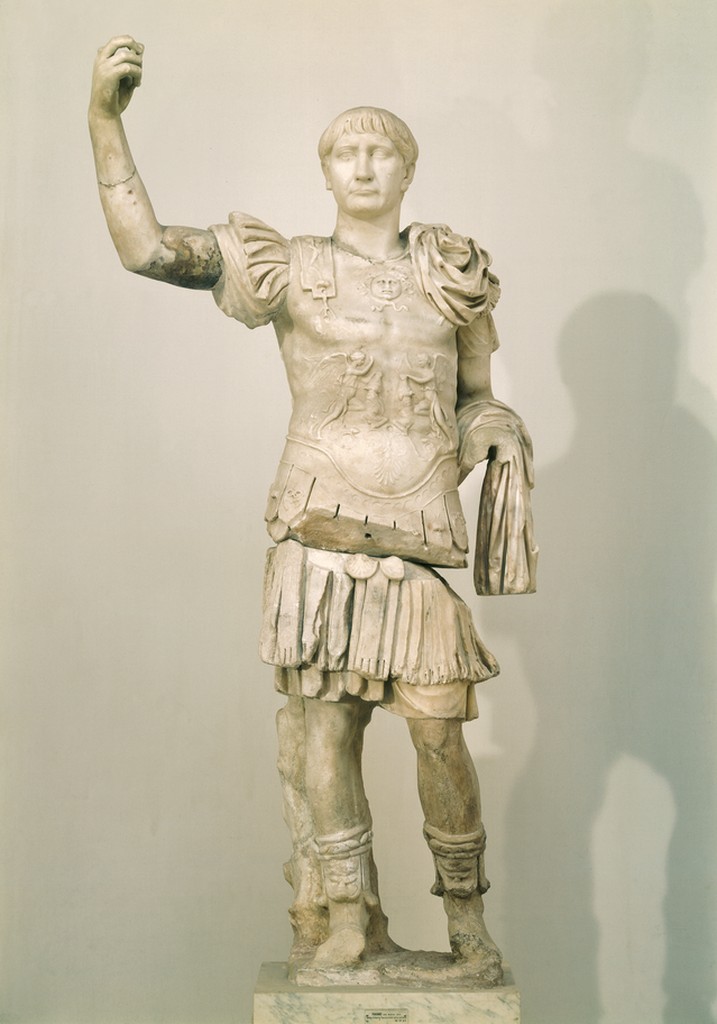 Portrait of Trajan depicted as a successful military general, a common theme throughout Trajan's imperial imagery. This marble portrait is from Ostia and is placed at Museo Archeologico Ostiense. It was made around 110 CE, and is 1.95 m in length.

The full length portrait of Trajan from Ostia shows Trajan depicted as a victorious military general. The cuirass and the military cloak are traditional elements of Roman victory imagery while the paired Victories on the breastplate derive from Greek iconography and can be traced back to reliefs on the Athenian Acropolis in the fifth century BCE (Tuck). Trajan's imagery alludes a lot to the imagery of Augustus, the first Roman emperor, whose images we will look at in this exhibition.

A major element of Trajan's imagery is that he is not depicted as eternally youthful. Instead, he maintains his middle-aged appearance in both is coin and marble portraits. The slight creases on the face, and the deep-set eyes help depict Trajan as a middle-aged man who became emperor around the age of forty-five. He is not depicted in a neo-veristic way like the preceding Flavian dynasty, in which their facial features were hyper exaggerated (Roche). 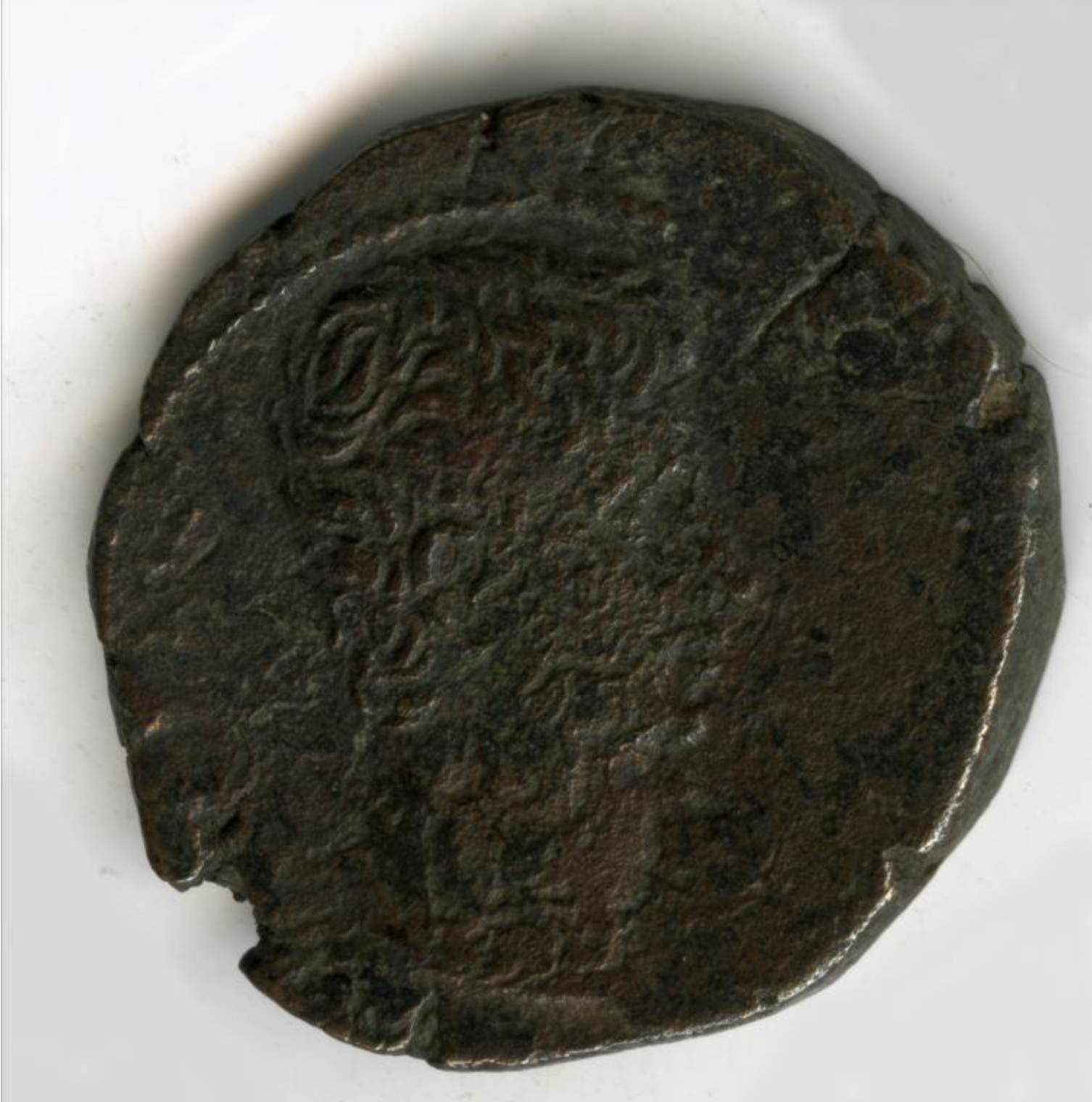 The obverse side of a coin showing Augustus. His trademark short, cap-like hairstyle is visible on the coin along with his youthful features. The inscription on the coin says "Caesar." 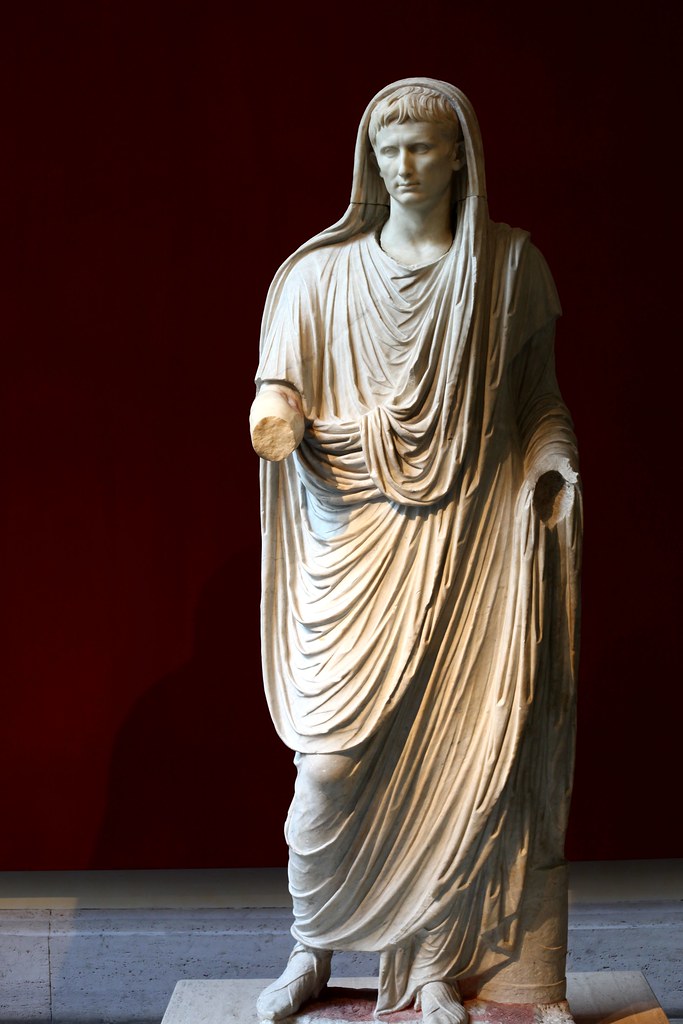 This marble statue shows Augustus as Pontifex Maximus or chief priest of Rome. It is originally from the Via Labicana, Rome and is currently at the Museo Nazionale Romano Palazzo Massimo alle Terme in Rome. It was built around 12 BCE and is about 6 ft in height.

Augustus' imagery has several elements of Classicizing portraiture, with Greek idealization being a significant part. Key to this idealism is Augustus' eternally youthful depiction (Tuck 126). Augustan imagery was interlinked with wide-encompassing Augustan propaganda. It was political and religious, emphasizing Augustus' rule being a new era for Rome. Augustus' youthfulness was a significant part of this idealized era.

The coin from the Auben Gray Burkhart collection shows a bare-headed Augustus. He is portrayed as a youth, consistent with his other public images, and is an example of Greek Classicizing (Pollok). His hairstyle is of particular significance here because it is very recognizable. It is like a cap of hair parted on the left in frontal portraits and falls into layered, comma-shaped locks (Tuck). This hairstyle is based on the Doryphoros of Polykleitos, a famous 5th-century Athenian statue (picture below).

The statue of Augustus as Pontifex Maximus is dated around 12 BCE, when Augustus was already in his 50s. However, he is again depicted as a young man in his twenties, with a smooth, clean-shaven face. This classicizing contrasted with veristic portraiture from the preceding Republican period. Augustus is shown as the chief priest, with his head covered and wearing a toga, conveying an underlying divine connotation (Calomino). This specific portrayal was part of the Augustan propaganda.

The Youthfulness of Severus Alexander 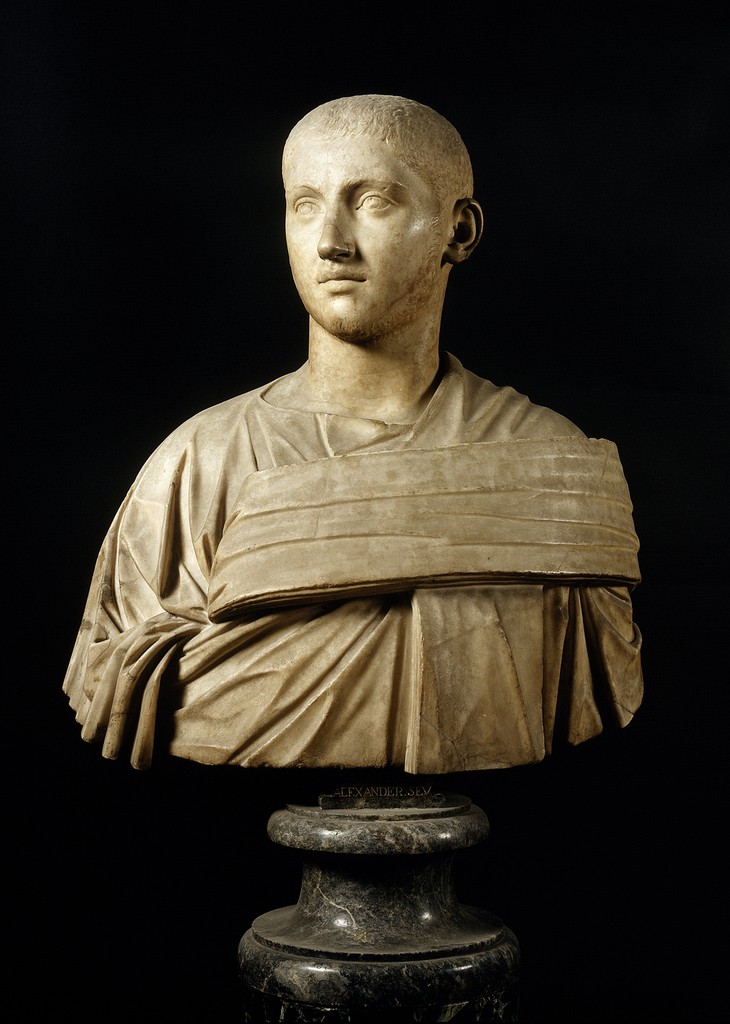 Severus Alexander, the last emperor of the ruling Severan Dynasty in 3rd Century Rome, came to the throne at the age of 13 in 222 CE. His portraiture is fairly naturalistic, with him being depicted as a teenager or a young man.

His features are rather juvenile, and his hair is short. This portrait does have a hint of beard, which means it was made in the later years of his reign. Severus Alexander's reign was marked by the dominance of his mother, Julia Avita Mamaea and his advisors (Davenport). It was marked by military and political upheaval, and his botched reaction to them made him unpopular. The youthful, powerless nature of his portraits symbolize these uncertainties. 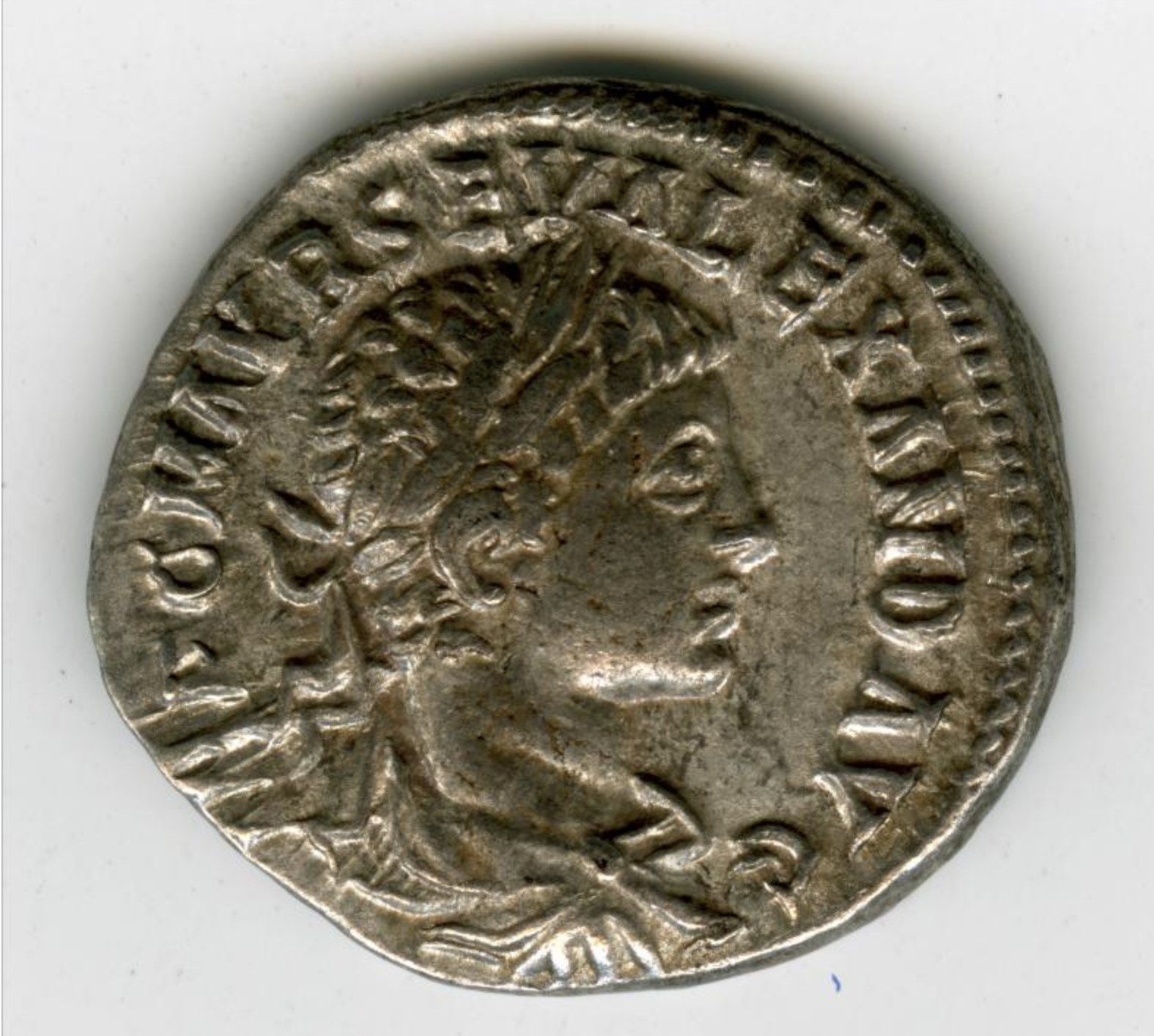 A coin from the Auben Gray Burkhart Collection at Rhodes College showing Emperor Severus Alexander, who ruled from 222 to 235 CE.

A lot of ambiguity exists surrounding the reign of Severus Alexander, and coins are a significant insight into it (Davenport). This particular coin shows a very juvenile-looking Severus Alexander. Instead of portraying himself as powerful and dominant, he is shown with largely youthful features. The choice to depict such a young-looking emperor is interesting because of the military's distrust and plotting against Severus Alexander. Ultimately, he was killed in 235 CE along with his mother and advisors as a result of a military plot against them. Severus Alexander's death marked the beginning of the political turmoil of the 3rd Century in Rome, a period of increased upheaval for the Roman Empire which saw many emperors with short reigns and a several political and military conflicts. 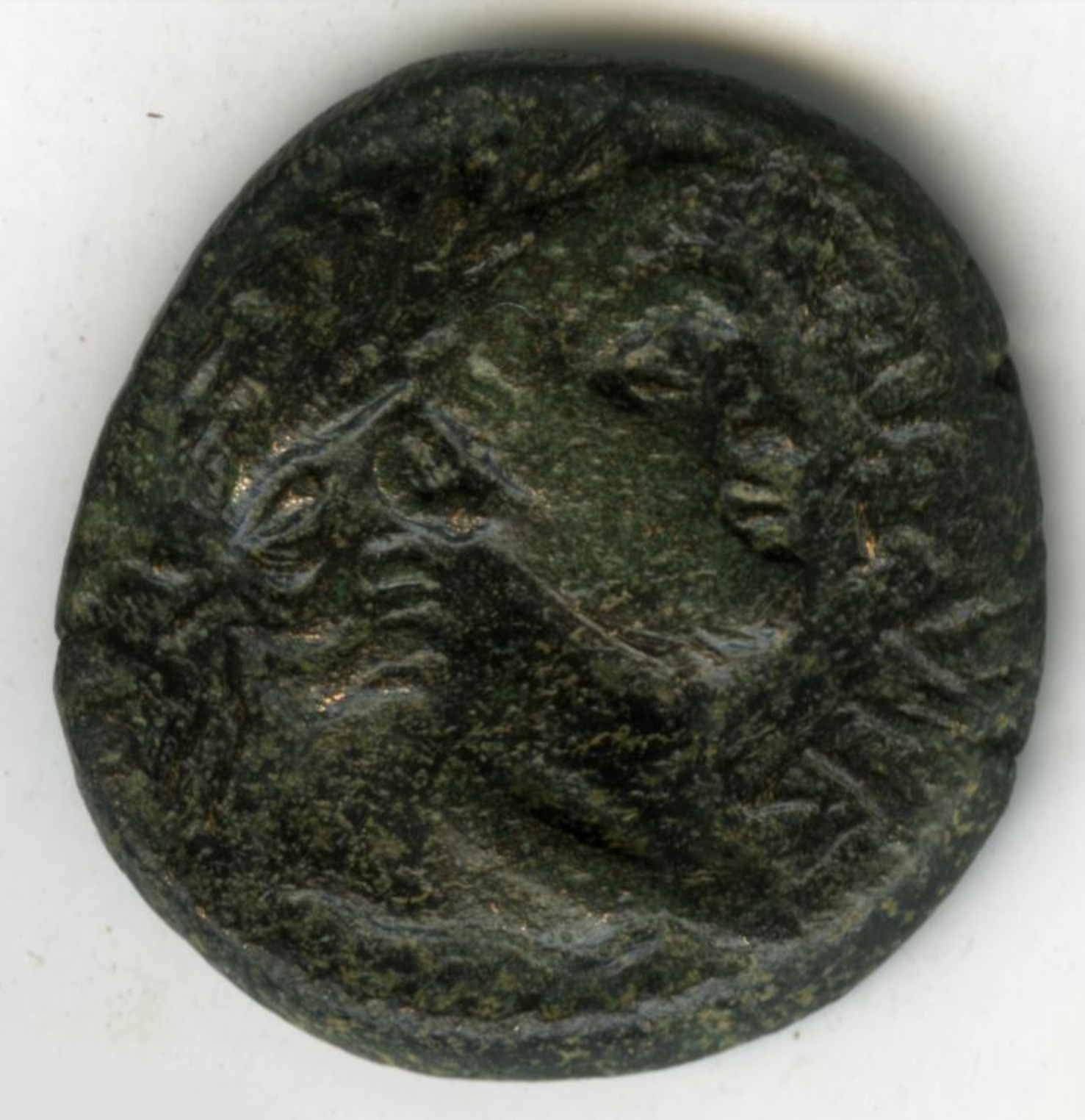 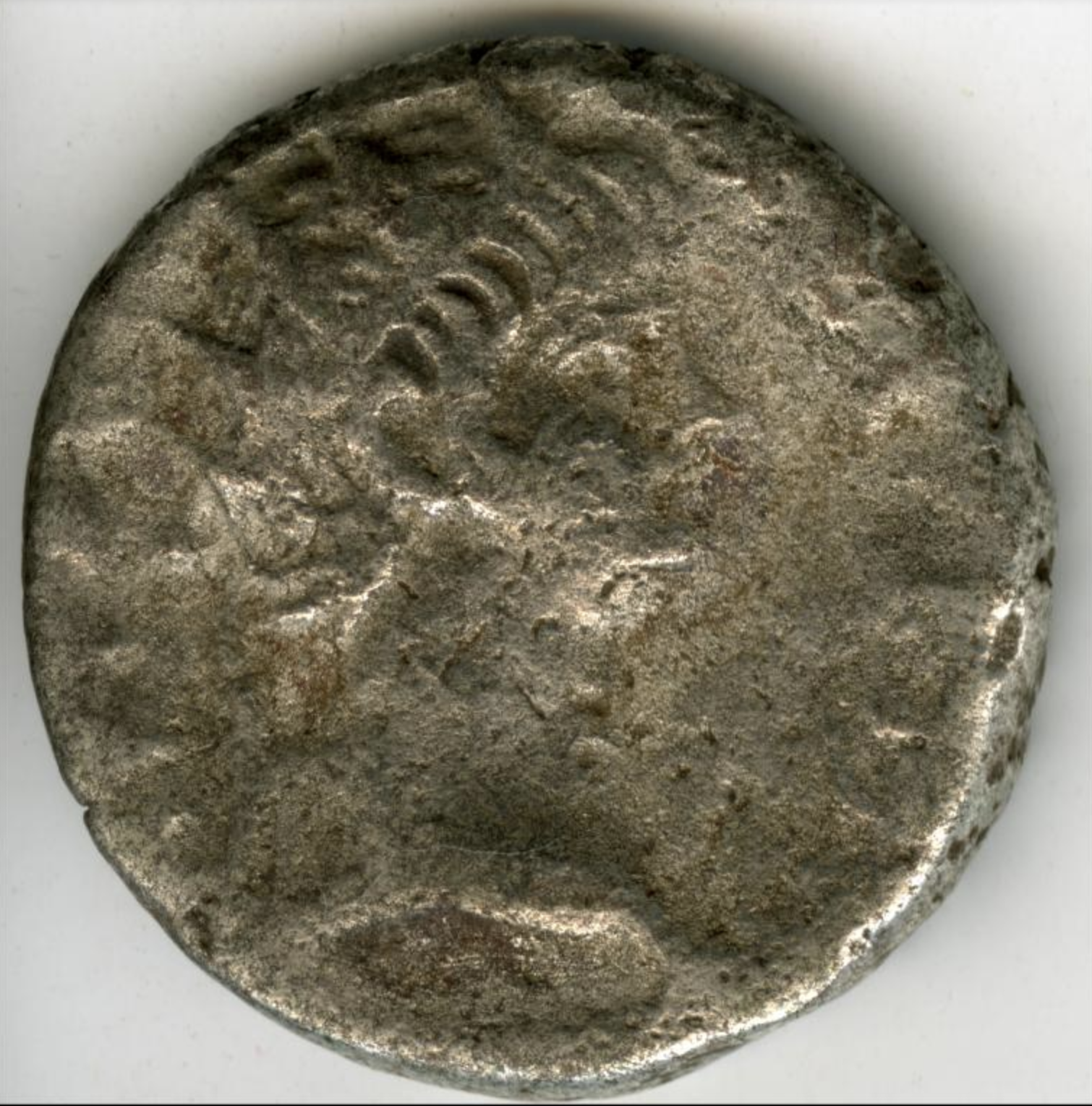 Nero Claudius Caesar Augustus Germanicus, known simply as Nero, is one the most infamous emperors in Roman history. He was the fifth and last emperor from the Julio-Claudian dynasty, which Augustus founded, and reigned from 54 to 68 AD when he committed suicide. Nero is best known for reportedly being tyrannical. Stories about him include him fiddling while Rome burnt, reportedly having sex with his moth and killing other family members, raping a Vestal Virgin, and castrating and marrying a man, among other atrocities (Champlin). He alienated the aristocracy, ignored the army, and drained the treasury to fund leisure projects like the Domus Aurea, his Golden House. His suicide in 68 AD was described as "one step ahead of the executioner," and he "passed into legend as one the greatest monsters in history" *Champlin 97).

Nero's portraiture, like his leadership style, defied established patterns. In a break from the portraiture of his extended family, the Julio-Claudians, Nero's image was heavier, with a massive neck and fleshy face featuring rounded cheeks and a double chin (Tuck). These features are visible in the coin portraits above, specifically the hint of a double chin. Also prominent was Nero's hairstyle, a coiffure with thick waves of bangs lying like a series of commas across his forehead. This hairstyle, also visible in the portrait below, was said to be true to his authentic hairstyle, resulting from a lack of grooming according to contemporary historians (more like tabloid writers) like Suetonius.

Nero's reign was unorthodox and unconventional, and his portraiture shows a break from norms and a strong sense of individuality. 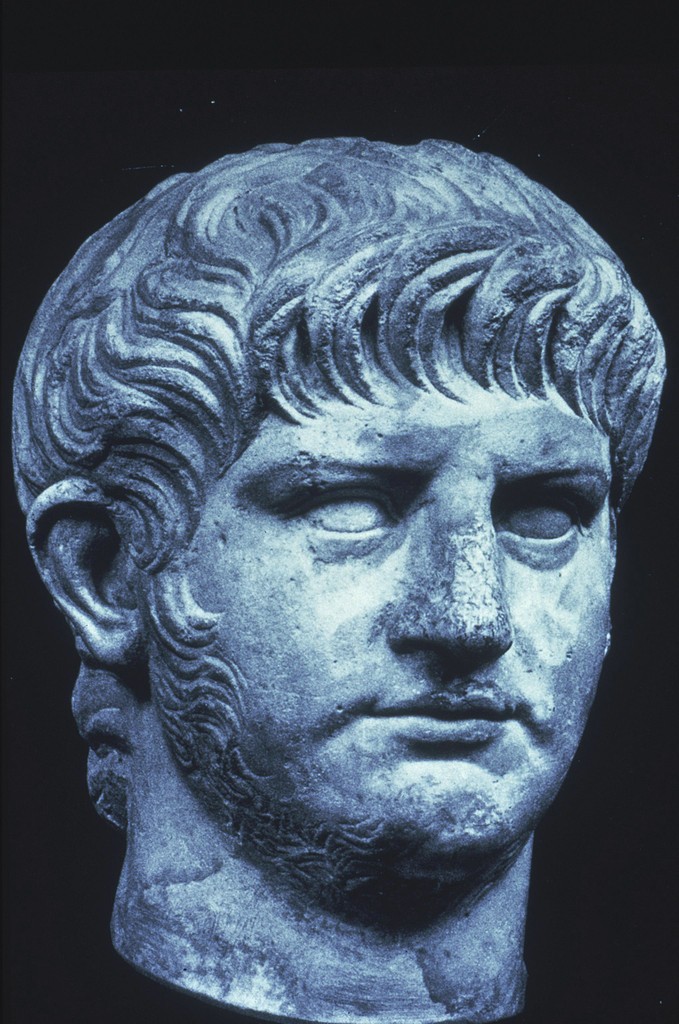 This marble portrait of the i famous Nero is current at the Museo Nazionale d'arte Orientale in Italy. It showcases some of Nero's characteristic features, including his hefty and fleshy cheeks, a slight hint of a double chin, and his iconic hairstyle, which looked a set of commas across his forehead. This statue was made around 55 CE.

Roman imperial art is fascinating because it is fundamentally meant to be viewed and interpreted by viewers who are expected to pick up the hints of propaganda showcased in the art. Constantine, Trajan, Augustus, Severus Alexander, and Nero were five very different rulers, and history has them treated in disparate ways. These differences are visible in their portraiture, making their imagery an integral part of ancient Roman history. At the end of this exhibit, one hopes viewers get a glimpse into the subliminal messaging and the historical context behind some of the imperial imagery discussed.