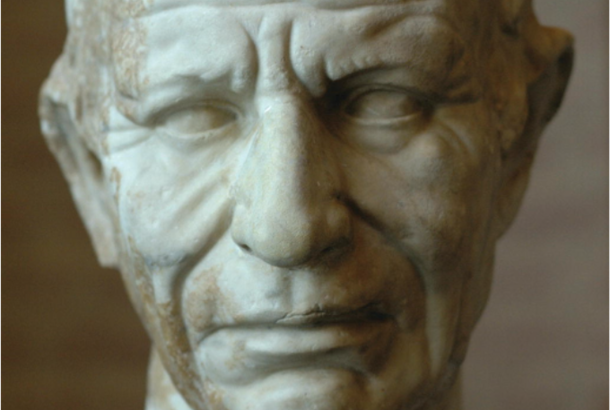 The Ancient Romain Empire was an extremely influential time for portrait styles. The preferred style of portraiture was highly individualized among emperors. Public portraits depicted Ancient Roman elites such as highly regarded senators, emperors, and military leaders. The purpose of these public portraits was to send a message to both the elite and non-elite about the individuals. Emperors chose their style of portrait based on what type of message and connections they wanted the public to draw from their image. Portrait styles were used to mimic the image of previous emperors that they wanted people to perceive a subliminal connection as well.

Starting in the Late Republic period of ancient Rome (147-130 BCE), there began to be a cyclical nature of portrait styles among emperors that enlightened this significance (Trentinella 2003). The trend of veristic portrait style began to gain popularity over the standard style of classicism. These artistic styles would continue to go back and forth with popularity. This shift in the artistic style of portraiture can be seen through the coins exhibited in the Auben Gray Burkhart Collection here, at Rhodes.

Verism became popular in the Late Republic (147-30) era in Ancient Roman art. Verism is an artistic portrait-style characterized by hyper-realism and idealized traits. Many veristic portraits differ from the actual realistic look of the subject of the portrait. Veristic portraits emerged as a backlash to the Classicizing portrait style which had been the standard artistic style previously in the Ancient Roman Empire. Verism not only sent relayed a different message to the public about the subject’s value but also determined who the emperors were aligning themselves with. Veristic characteristics include accentuated wrinkles and lines around the face, a fully fleshed out face and neck, furrows of the brow, and other unnatural features of the emperor's face (Tuck 2021). The unnatural features especially highlighted old age, to align themselves with wisdom and maturity. These features also sent a message of authority and authenticity. Contradictorily, veristic traits in the body often highlighted an athletic and muscular physique. This was to send the message of strength and military triumph. 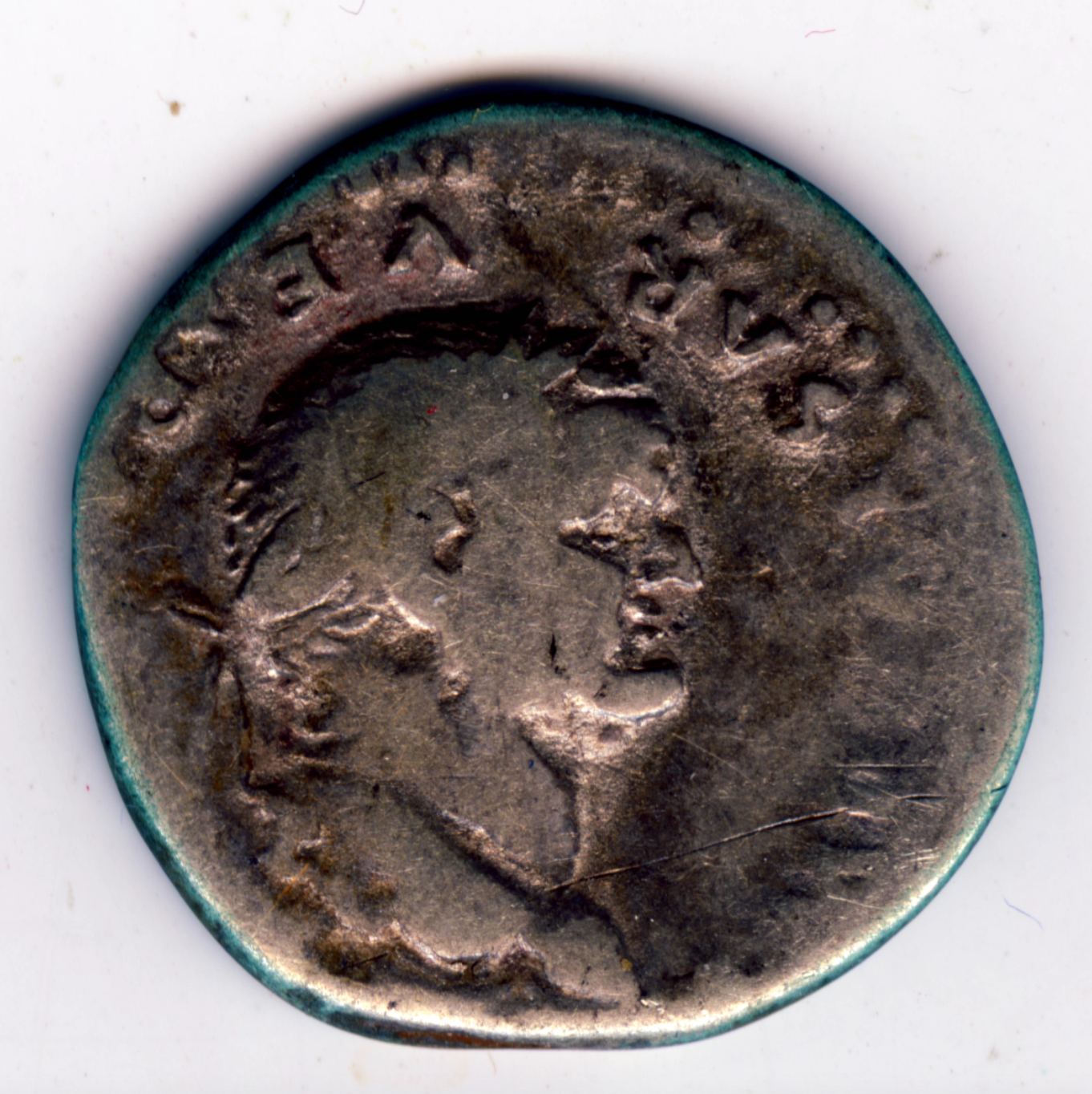 The obverse of this coin shows the portrait of emperor Vespasian, who reigned from 69-79 CE. Vespasian is credited with reigniting the popularity of Roman veristic portraiture. Becoming an emperor at 60 years old, Vespasian leaned into the hyper realistic depiction of his facial features. This is reflected in the coin with the deep indented lines around his eyes, symbolizing wisdom. There appears to be a fully fleshed out shape of the head and neck as well. The portrait also accentuates the wrinkles around the mouth to show maturity (Tuck 2021).
Coin 99 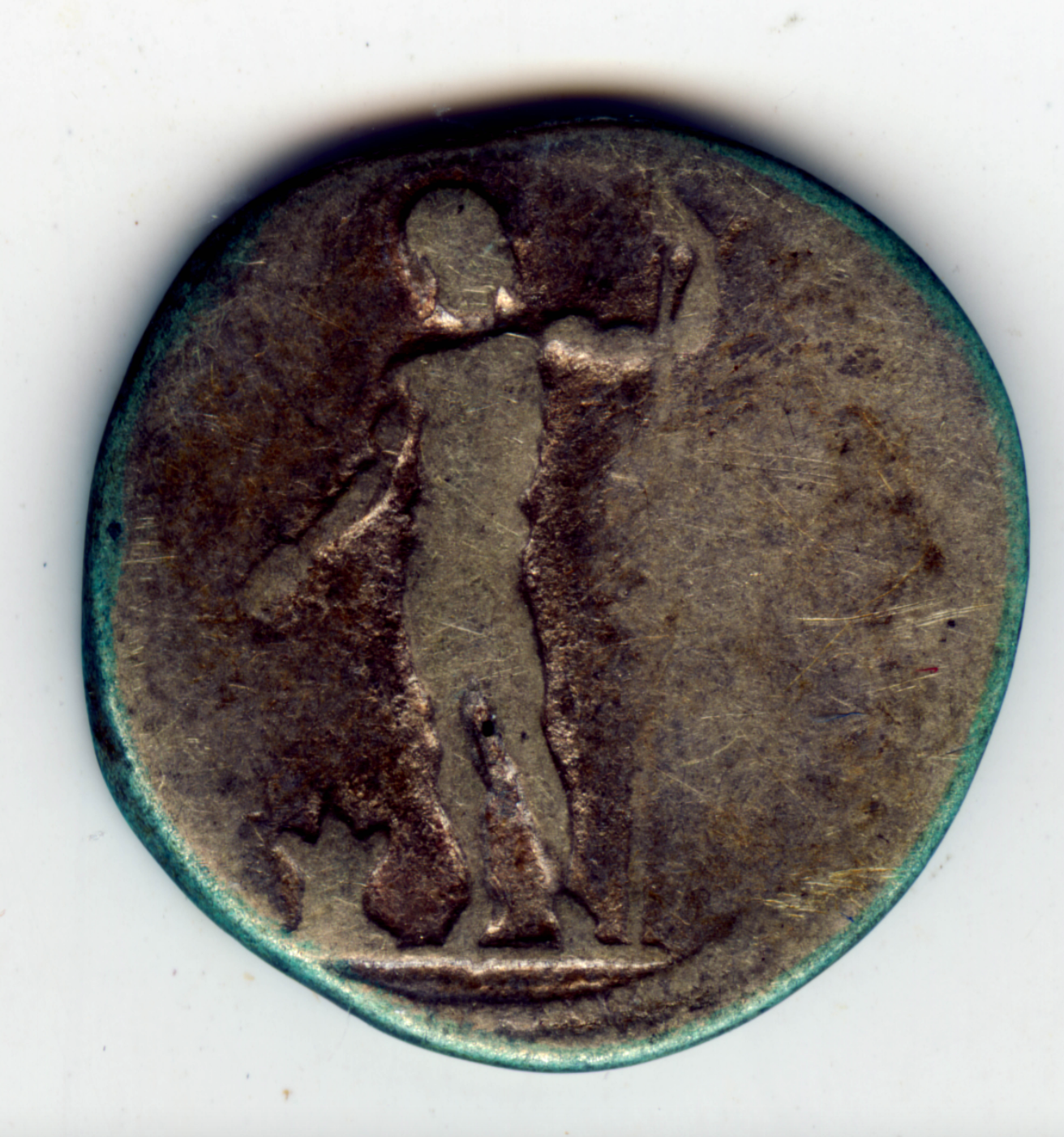 The reverse of this coin shows a muscular athletic figure holding a scepter. This is a veristic image because it depicts the highly idealized roman body type for athletes. This would not have reflected Vespasian's personal structure (Tuck 2021), and instead, it was an intentional choice to send the message of strength through the overly pronounced muscular image. 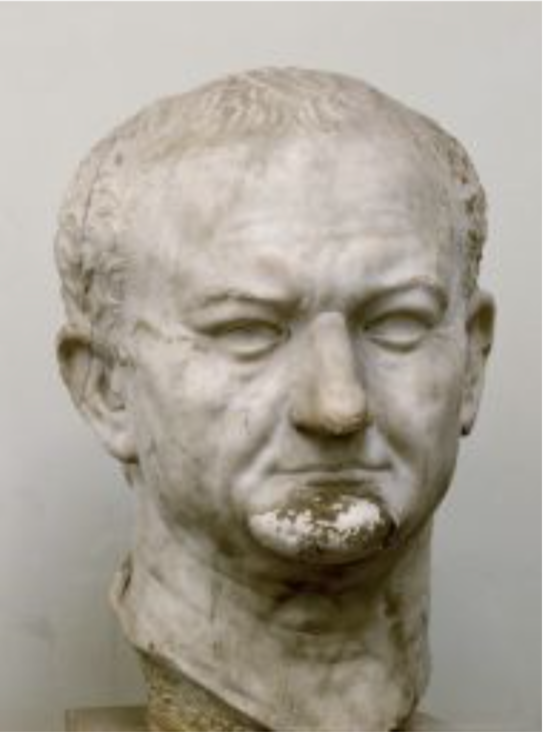 This portrait sculpture of Emperor Vespasian (late 1st century CE) it shows a frontal view of his veristic style choices. The indented forehead wrinkles are clearly displayed along with the folds in the neck and bottom half of his face. Vespasian preferred the veristic style of art not specifically for the visual features, but for the relationship that the features reflected (Tanner 2000). The veristic features bared no resemblance to the previous portrait styles of emperors. For Vespasian, verism functioned as a tool of propaganda to distance himself as an individual separate from previous emperor's dynasties. 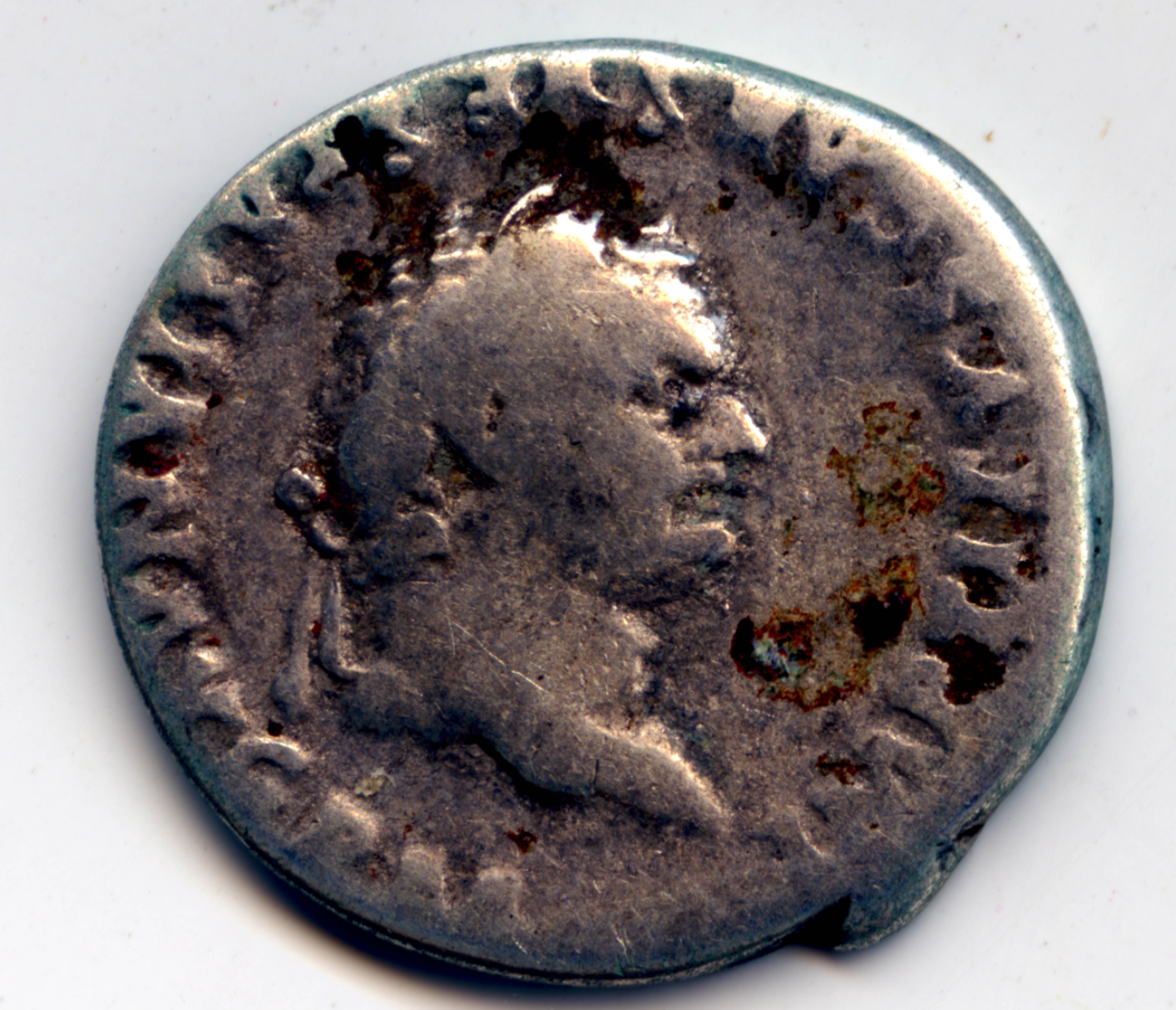 The Obverse of this coin depicts the portrait of the Roman Emperor Titus, who ruled from 79-81 CE. Titus took the throne after his father, Vespasian’s death, and continued the veristic style of portraiture during his short reign (Tuck 2021). Titus’ profile on the obverse of this coin is like his father's, and while it is in part due to the familial relation, it is clear that the hyper-realistic aspects of verism are displayed. Titus continued to be the veristic staple of a fully-fledged face and neck and protruding chin, as well as sharp lines around the eyes.
Coin 86 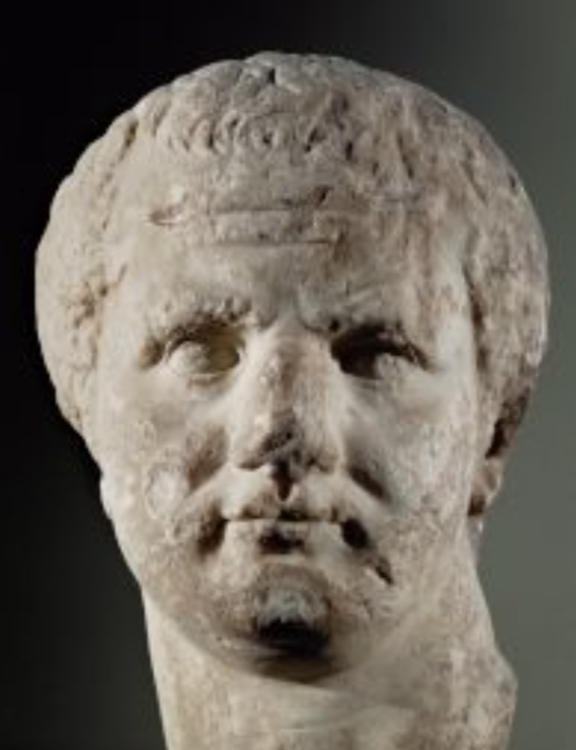 In this portrait of Emperor Titus, the hyper-exaggeration of his aged facial features are displayed. Titus came into power when he was 40 years old, and it is very likely that the forehead lines and other signs of aging are greatly enhanced. Most of the artistic style and portraiture of Titus and Vespasian is difficult to separate because of their familial succession and the short-lived reign of Titus. Even so, Titus' artistic choices and influences were a continuation of his fathers focus on verism.

Augustus was the emperor who brought back the classical style of portraiture to his imperial image (Trentinella 2003) following the popularity of verism since the Late Roman Republic. The Classical Style of Roman art portraiture is rooted in the classical Greek artistic style that heavily influenced sculptures during the Greco-Roman period. The features that are prominent in the Classical Portrait style include an emphasis on youthfulness, evidenced by the appearance of very smooth skin and delicate features. This was meant to connect the subject to the “golden age” of the Ancient Roman Empire. This style also reinforced the idea of dynastic succession by portraying the individuals as having similar features. This was meant so that the emperors intentionally create a connection between themselves and an emperor they wanted the public to connect them with. Additionally, it was extremely important to create imagery pushing propaganda for dynastic succession so that Augustus could claim the rightful heir of his uncle. The classical style in roman portraiture did have shifts within itself over time, becoming more likened to “smooth” verism categorized by low relief during Trajan’s rule as emperor. 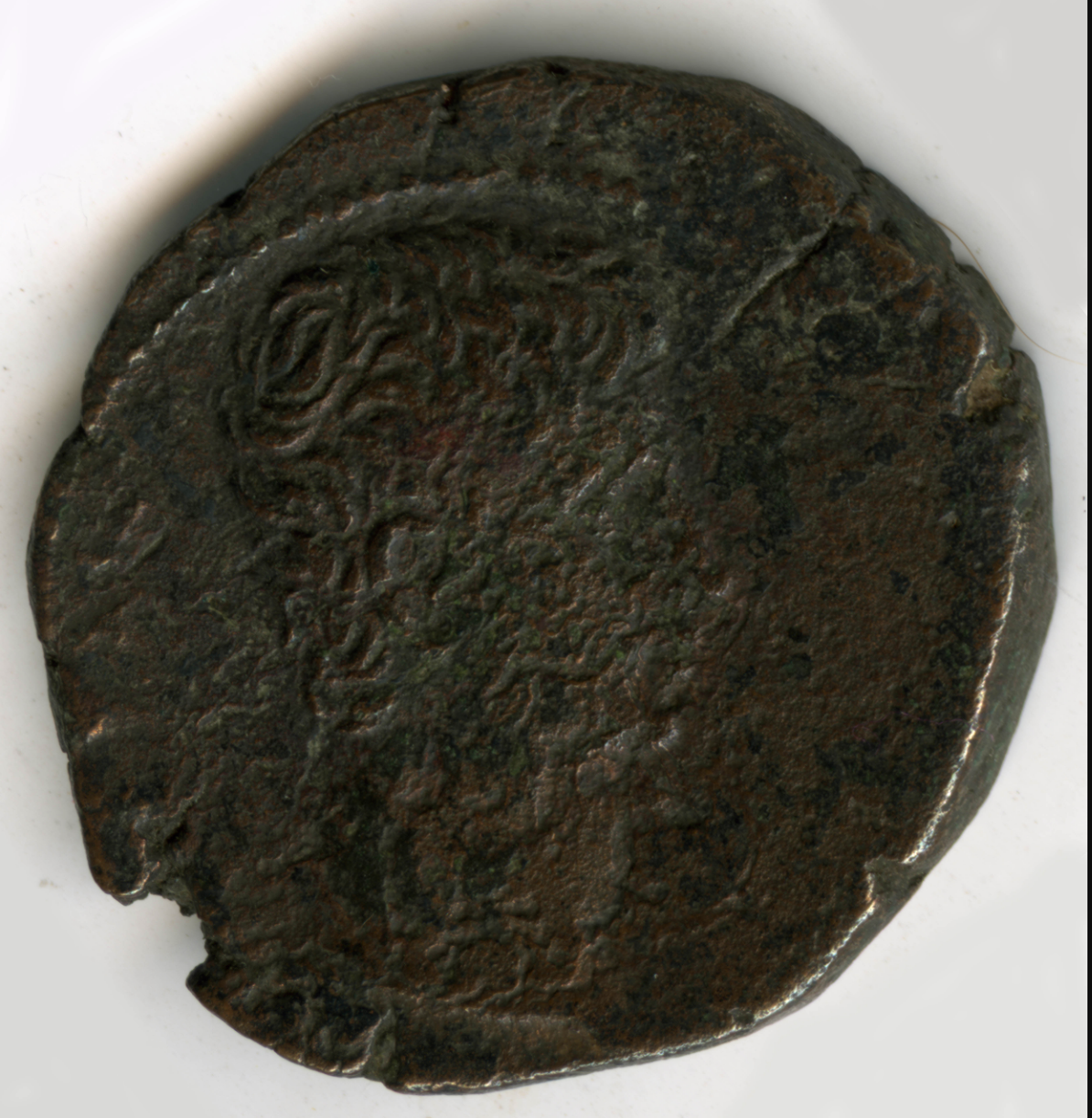 The image of Augustus on the obverse of this coin shows some of the elements of classical style that he brought back into popularity during his reign. Although the specific facial features are hard to see, compared to the other images of veristic portraits on coins there is a clear difference in characteristics. The shape of Augustus’ face is much slimmer than the veristic style portrait. Additionally, you can see the intricate curls that later emperors used to draw connections to Augustus. Augustus significantly spread the resurgence of the classical style by unifying coinage across the empire so that local cities issued coins bearing his portrait and inscription (West 2003).
Coin 005 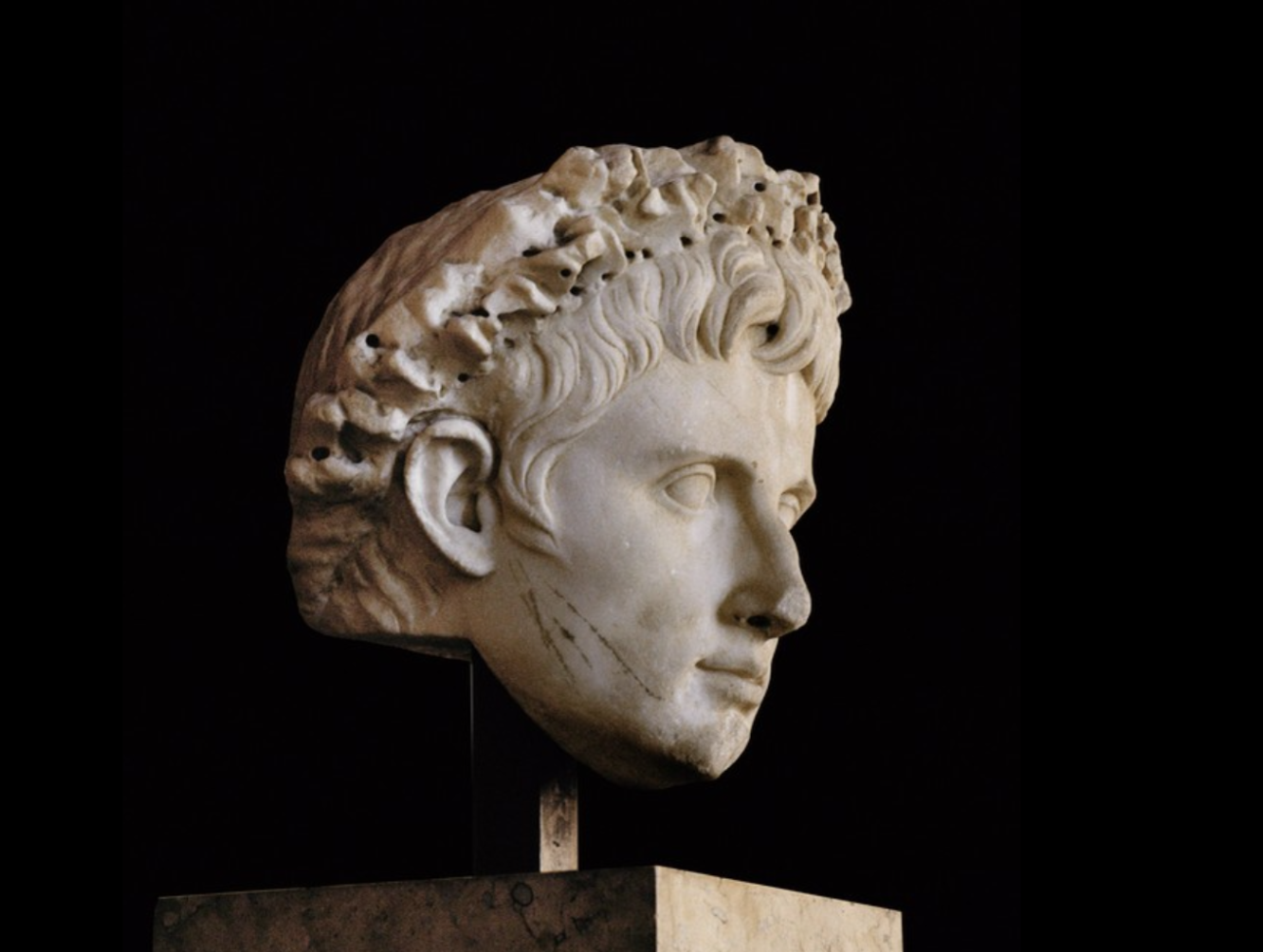 The frontal portrait of Augustus shows a clearer view of the classical style of his portraits. His skin was made to be extremely smooth to represent youthfulness. Augustus used the classic style as propaganda to assert his imperial image (Wallace-Hadrill 1986). This portrait shows the influence that Augstus' use of classical style had on the emperors afterward because this portrait was commissioned post-humously during the reign of Claudius.

Obverse: The classical features of Trajan's portraits intentionally mimics Augustus’ to send a message to the public of a connection between the two emperors. Trajan (r. 98–117 A.D.) used similar Hellenistic artistic elements of classical portraiture to show idealized features similar to that of Augustus (Trentinella 2003). This form of propaganda was meant to cement Trajan as another representation of the golden age of the roman empire while retaining individual features. The addition of similar curls to Augustus was another odd to the previous emperor.

Reverse: The reverse shows an image of Jupiter also embodying the idealized roman body present in many forms of classical sculpture. It also follows Augustus’ pattern of relating himself to a version of the Gods. 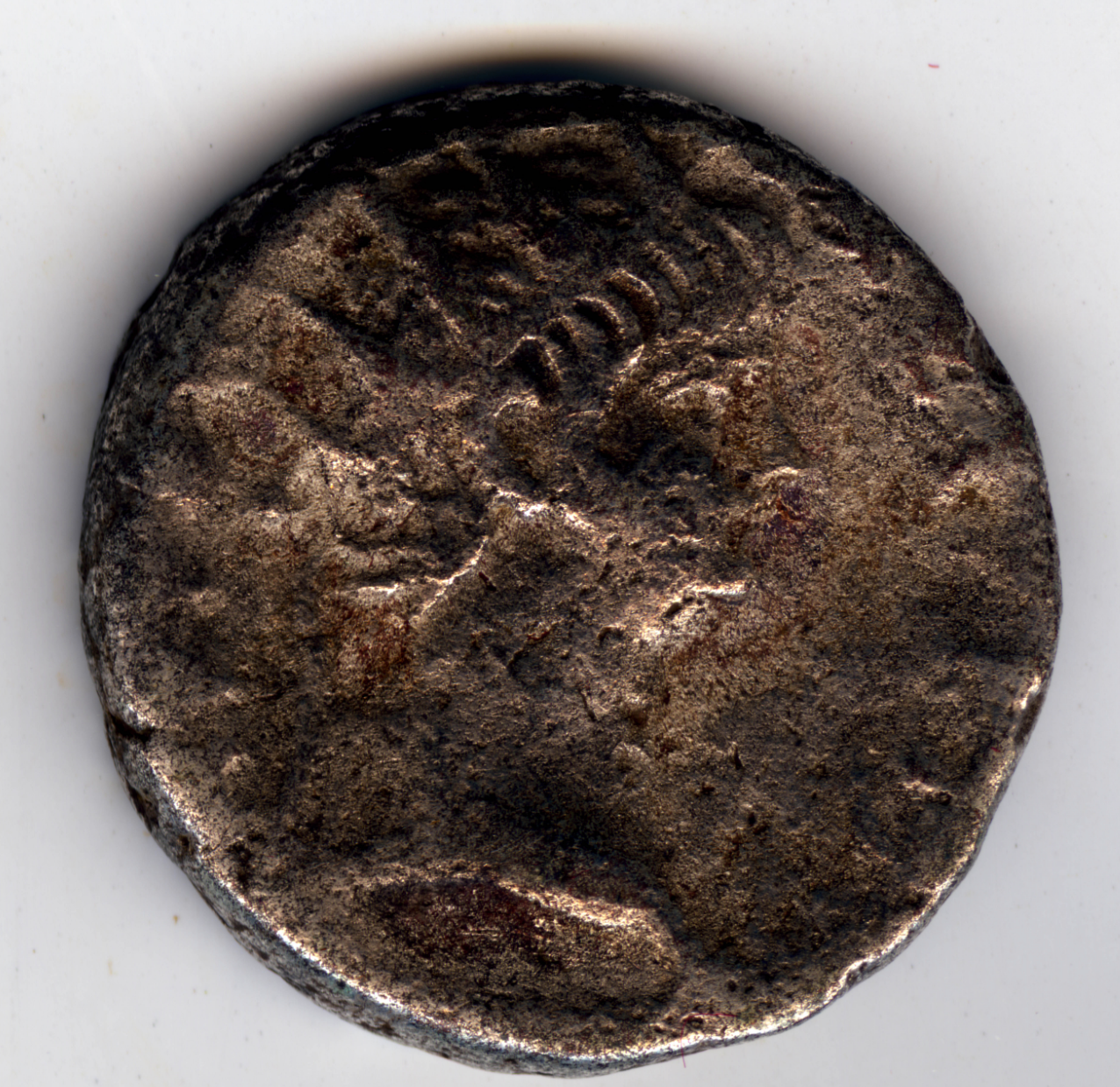 The portrait style of Nero shows an interesting overlap between classic and veristic influences. Nero came into power at the young age of 16 and originally had his style reflect that of the previous Julio-Claudians (Hiesinger 1975). While he portrayed himself as youthful to signal the vitality of the roman empire, he also added characteristics that pointed to maturity seen in the veristic style, such as general body type. Nero kept the style of curls popularized by Augustus to remain in connection with his image. 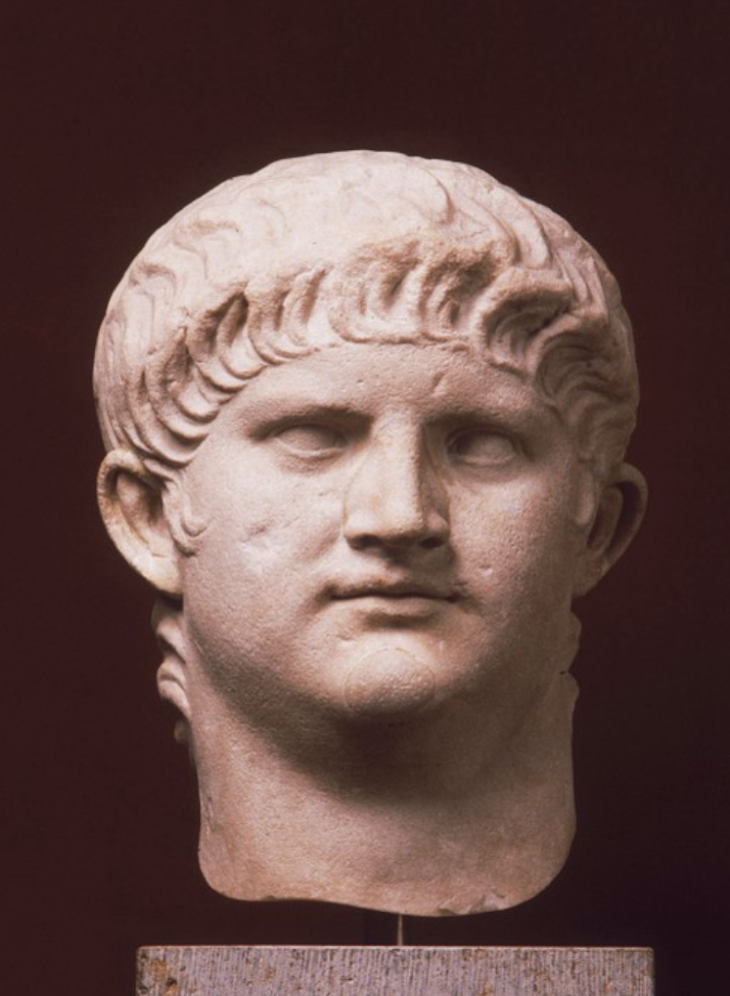 The frontal view of the colossal head of Nero displays more of the overlapping features of Nero's stylistic choices. It is more obvious in the frontal portrait the veristic representation of a fully fleshed out neck and face, however, he does have the curly-hair style that Augustus popularized in his classical portraits. This was intentional to liken himself to the imperial image associated with Augustus. Nero's incorporation of both veristic and classical elements is an interesting look into the changing artistic culture during his reign (West 2003).

The Ancient Roman Coins in the Auben Gray Burkhart collection at Rhodes college show the stylistic changes in art portraiture. The artistic and cultural shift between veristic and classical portrait styles was particularly cyclical from the Late Roman Republic period to Trajan's rule. The difference in the veristic and classical styles represents changing values and public messages of propaganda from the emperors. While verism is typically regarded as the main Roman style of portrait art (Rose 2008), there is plenty of evidence that the greco-roman classical style and influences of Hellenistic art were heavily featured in the artistic history of the Roman Empire. Emperors used coins to spread their image throughout the empire, which changed the popularity of each art style during these periods. It is important to understand the influence that the portrait styles featured in coinage had on the social, political, and cultural implications in Ancient Rome.